Victory Fanfare Presents: The Good, Bad, and Ugly of Until Dawn

Well it’s October, and it’s time for spooky games. For the month of October I’m going to attempt to play a spooky game a week, but the last game I have in mind may take a bit longer than a week. Anyway let’s talk about Until Dawn. Released for the PS4 in August by Supermassive Games, Until Dawn was originally planned for the PS3 and was going to feature Playstation Move support, luckily for Until Dawn it was delayed and released for the PS4.

Until Dawn is a choice based survival horror game, the choices made reflect the outcome of the game. You can end the game with no characters, killing everyone in your party. That’s right, you may or may not know how to save a party member. Speaking of which, maybe we should talk about the characters, and the story itself. The story revolves around 8 people, but how the story begins is with 10.

Before I go any further, I will be referencing the end of this game through out this article. It’s almost too hard not to dance around it or just make jokes about it at all. Anyway this is your SPOILER WARNING, you don’t want to know any more, go ahead and skip this for now, but come back later! Otherwise, let’s get to it.

STORY
Sam is our hero, or is it Mike? Well, Chris is a interesting character too, but is he the hero? The others are good too, Jessica, Emily, Ashley, Matt, and how could we forget about Josh. Oh Josh, such a joker, always joshin’ around.. JOKES. Hey but wait, I said 10 characters. That’s right Josh and his twin sisters Hannah and Beth are there too! It didn’t end up too great for them though to say the least..

On the year anniversary of Hannah and Beth’s disappearance the eight friends who lived decide to go back. Now, I neglected to mention how they got into this mess, but don’t you worry, I will get back to this. All the gang is back, but we’re first reintroduced to Sarah, and she’s pretty badass.

THE GOOD:
Right away Until Dawn has me hooked. Eight friends trapped in an isolated cabin in the winter? Yes please, and did I mention this is great! It’s everything I wanted in this game, it’s literally just a campy horror movie and it’s fantastic. Having actors you may recognize helps as well, honestly the only character who really took me out of it for a minute was Josh who was played by Rami Malek (Mr. Robot) and it wasn’t that he was bad it was just that I was watching Mr. Robot at the time.

The choice mechanics worked very well, and makes for great replayability. There seems to be many ways this game can end, it’s just all up to you and the choices you make. This is fantastic, even Telltale’s The Walking Dead didn’t have as many outcomes as this game has. The story itself as I said is basically an old horror trope, which isn’t bad in this case. It makes the characters a bit more believable, and the things happening around them make more sense. That is up until the end where everyone and everything loses it’s s#!t. 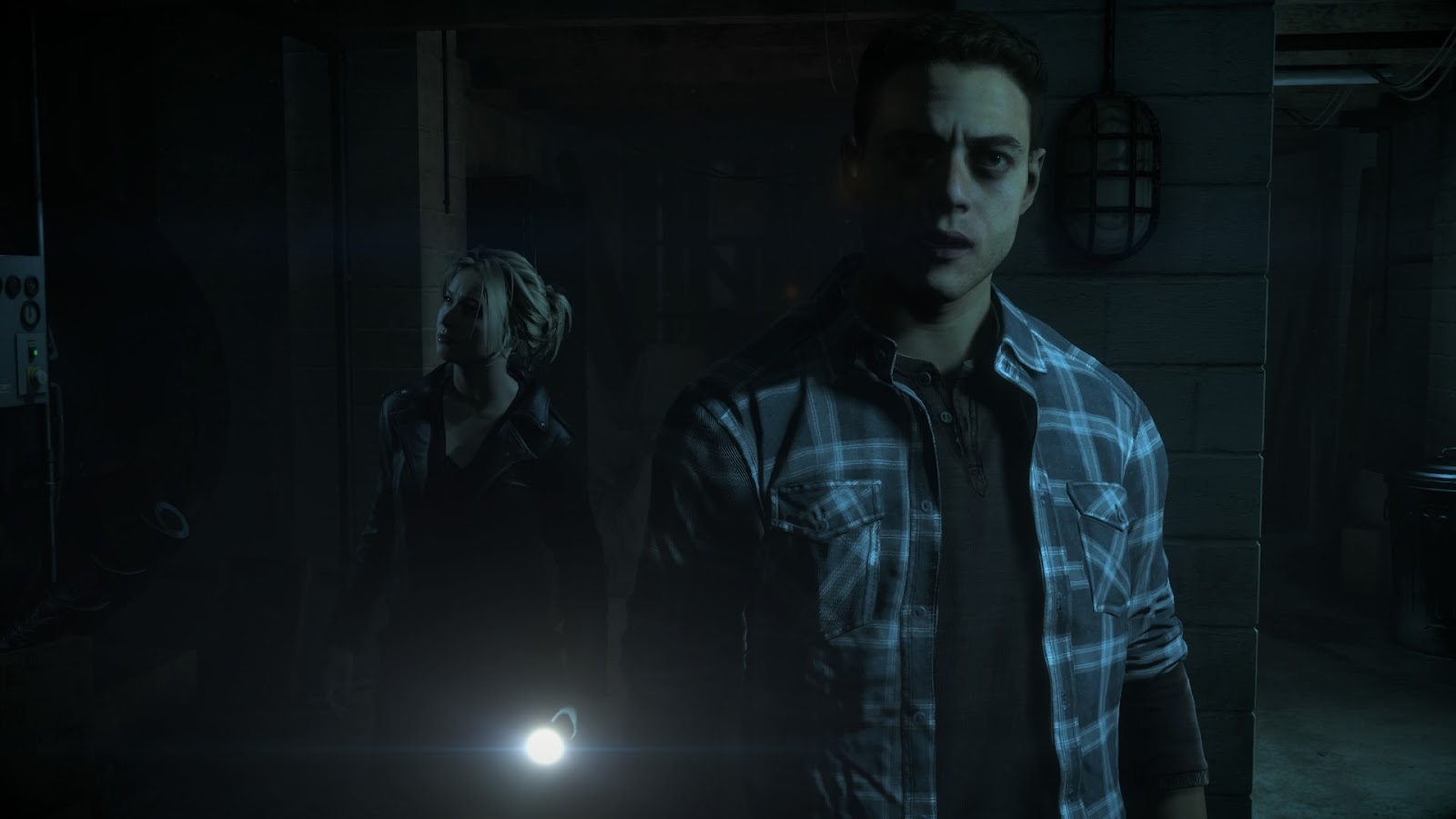 THE BAD:
When I say Until Dawn loses it’s **** I really do mean it, the story is great and you feel for everyone of these characters, but then the game seems to make you wanna make all these choices right at the end only to find out one or the other thing can choose your outcome. You feel it coming on, and if you aren’t paying attention to those totems one of these characters you fall in love with will die. This reminds me of another game I’m planning on tackling this month, but more on that another time.

Sometimes the characters do random things, as most the time you’re coupled with one other person, if you’re exploring that other person is probably right behind you bugging out. It only happened to me in a few instances, but when it did it made for some funny awkward moments.

The controls are pretty solid, but one or two times I failed a prompt due to it saying I moved, when in actuality I didn’t move at all. It felt too sensitive at times, this can make or break you as I’ll give you one hint here. Just because you get weapons, doesn’t mean you have to use them against everything you see. This includes times when you’re just having fun and with your buds, before all the mayhem ensues. 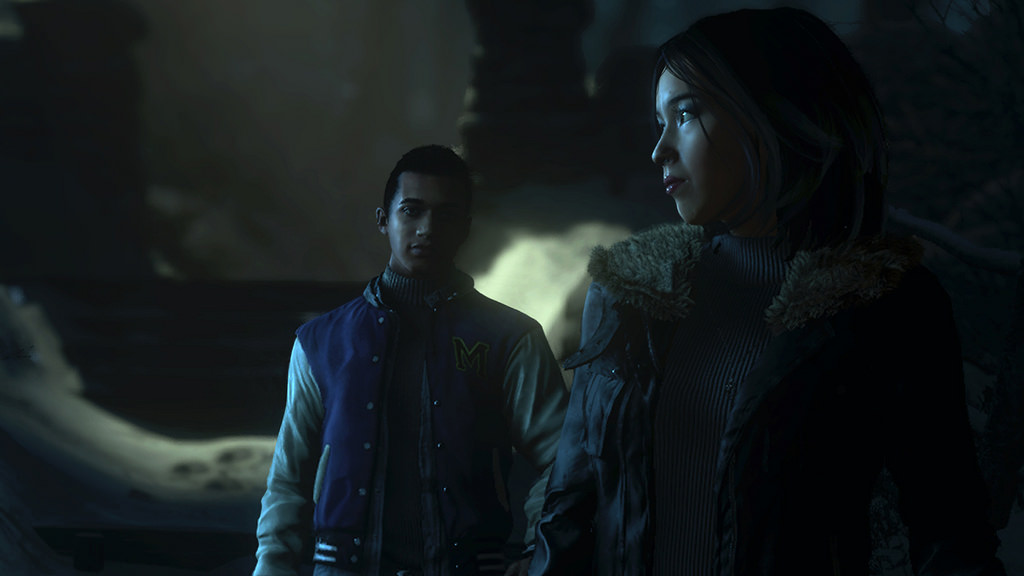 THE UGLY:
The only thing I found ugly about Until Dawn is end, and again, this really is up to how you play it. I took a couple days while writing this to play through again and make different choices, and sure the ended changed a bit, and more people made it out with out dying, but it still left me with the feeling that they’re going to try and milk this game with a sequel or some type of DLC.

Let me break this to you, the ending just kinda leaves you wanting a bit more. Sure, it’s nice to hear the recap of the stories from the different characters involved, but also what the hell was going on with Jessica for half the game? Or Matt for that matter, there’s just things that get lost in the shuffle and don’t really add up, but again- it’s all up to how you play it. So choose wisely, quickly at times, and with your own moral compass. You can try and live out your horror movie spoofs and be a trope of every character type, but is it worth it? What will you lose in the meantime?

OVERVIEW:
Overall, I give this game a 10/10 must play, hell a must own. There’s so much possibility that you could play it once a year, for at least four years.. Maybe? Then again, it only took maybe 9-10 hours to beat. Nonetheless the game is magnificent and they did a great job with these mechanics and I couldn’t even imagine what kind of trainwreck it could have been had it come out for the PS3.

Writer and content creator from Denver Colorado, mostly knowledgable in the realm of retro video games he also creates music and music mixes.

Victory Fanfare Presents: The Good, Bad, and Ugly of Until Dawn