This may be a bold statement, but Catherine is one of the most interesting games released for the PS3. Part anime, and moral choices, this unique puzzler has some interesting development, or does it? That’s what we’re here to discuss! So why waste time and lets just get into it yeah? Oh, well, maybe we should talk a little bit about Catherine if you’ve never played. If you’d like to skip any of that though, now is your chance!

Catherine is a puzzle-platform adventure game about a man named Vincent Brooks. He has a girlfriend named Katherine who is interested in finding out if they’ll ever move forward in their relationship. Then begins Vincent’s nightmares, and the core gameplay of this game. While contemplating his relationship with Katherine, he meets and has an affair with another woman who is named Catherine.

Has this gotten a bit confusing for you? Well, it’s only going to get worse. Vincent spends his time awake at a bar conversing with friends about his situation, and after each day you’re presented with a “new” nightmare, and more moral choices.

The Good:
As I said at the beginning. Catherine is a very interesting game. It has a very story driven feel, while allowing the player to take these moral choices between puzzles. The puzzles get hard fast. Honestly, it’s almost ridiculous how fast this game throws you into the thick of it. The Tutorial is fairly simple, but immediately you have to really take what you learned and expand on it fast. They are not screwing around.

The story itself is interesting enough to keep you in, but not enough to make you feel fulfilled. I’ll expand on that more later. What really gets me into this game is the puzzling. It’s fantastic, and for the last gen of consoles probably the best. I say probably because there’s puzzle games I missed on the last gen, that may be better, but all in all this has been my favorite.

The game play also has sections of questions that help give you one of eight endings, these are reflected by your ‘karma’ level. They’re mostly questions about love, and how you’d do in certain situations and ask you as the player to be as honest as possible. I did this at first, and then I just kinda gave up. Which now I regret as I move into the bad.

The Bad:
As I stated above, the story’s ending is a bit, lackluster. Or at least the ending I got was, I just felt with all my choices, and everything I’d gone through I deserved more, but that’s kind of the deal with Catherine, why do you feel like you deserve more? You’re a bit of a loser, and you’ve gone and cheated on your girlfriend only because the opportunity arouse and you were scared to commit? Come on, you don’t deserve more, and what I got, is more than Vincent deserved. 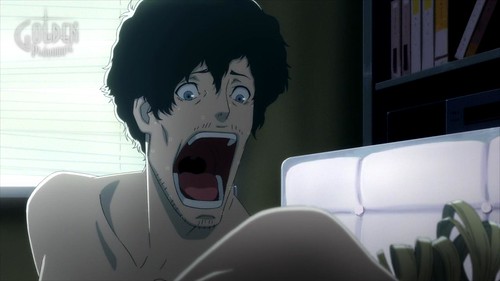 The Ugly:
There’s eight different endings, all of which are based on your karma level, these sections are- okay. They get a bit repetitive and don’t keep your focus, or at least they didn’t in my experience. I’m not always the best with these games because sometimes I’ll just choose something and then regret it instantly after, this is my fault, and not the games. So I guess, what I’m saying here is there is no ugly to this game, the game is solely as bad as you make it. While the controls sometimes feel out of your hands, it’s all on you, and the mistakes are your own.

Overall I give Catherine a 10/10 and definitely a fun game to play with your significant other. You know, so they can look at you judging your not quick on the draw choice of some of the questions. On second thought, I don’t want to cause any relationship fights here so, play it on your own, or at your own risk.

How do you feel about Catherine? Let us know in the comments! Or contact me on twitter @johnnyketchum

Kickstart This - A Fistful of Dartz: The Film

ASH VS. EVIL DEAD Gets Some New 'Kick-Ash' Art

Writer and content creator from Denver Colorado, mostly knowledgable in the realm of retro video games he also creates music and music mixes.