Another zombie book titled E.L.E. Event Level Event is making its way through the piles and piles of floppies already centered around this decade’s feature monster. However, Jason Parsons promises this will be different.

This is a story of survival, told through the eyes of seven unique characters. Pandora Falls is a small tourist town nestled deep in the mountains. It’s a town where everyone knows each others business and for the most part they all get along. On the day of the town’s fall festival, we find everyone is busy with their day-to-day life. Almost nobody notices a glowing green comet crash-land in their own backyard! The events thereafter will change the course of their lives forever…if they survive that is. 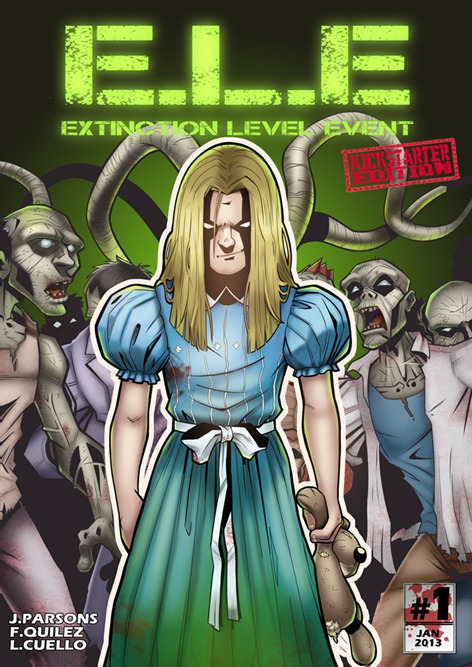 The cast of characters seem like your run-of-the-mill teens who band together for survival, each archetype filling their role dutifully. But I’m inclined to think there is something much more to it than that. I’m a sucker for intrigue, and E.L.E. lends just enough to have one’s interests piqued. For instance, where the heck do aliens come into the zombie equation? And that’s just one of the mysteries promised in this series.

Funding the Kickstarter campaign will give backers the first two issues (the first issue if you only choose the $5 tier) of an eight-issue long series. Fund this if you like zombie stories like The Walking Dead, and watching science fiction dramas like Falling Skies. There also may be a little dash of Resident Evil, who knows?

As of writing this post, there are only six days left on the counter. So act fast if you want to support the creation of this comic series.

Host of Intro to Geek on Shauncastic.com. Her love of all things Mass Effect knows no bounds. She also carries an obsession with comic books, video games, and quirky television shows. Her heroes are Tina Fey, Mindy Kaling, and Gail Simone, and hopes to be just like them when she grows up.

Kickstart This – A Fistful of Dartz: The Film