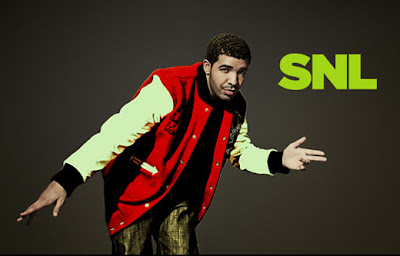 My favorite sketch from the Anna Faris/Drake SNL episode from Saturday isn’t online because of copyright restrictions for the “Tell Him” song. Boo! So, instead of posting that video clip, I’ll post my second favorite skit from the night: the Digital Short A Brief Interview with Drake.

Watch it here and let me know which segment was your favorite. I think mine was the extremely close up interview!

Also, since I can’t share the video, I’ll just share the lyrics to the “Tell him” song. Many thanks to Small Screen Scoop for transcribing it all!

I know somethin’ about love
You’ve gotta want it bad
If that guy’s got into your blood
Go out and get him
If you want him to be the very part of you
That makes you want to breathe
Here’s the thing you do
Tell him that you’re never gonna leave him
Tell him that you’re always gonna love him
Tell him, tell him, tell him, tell him right now
“But I did tell him that on our first date. I told him I would always love him and I would never leave him. He seemed really weirded out.”
“Oh my God, you can’t say something that intense on your first date.”
“Yea, Kendra, when you first start dating a guy you have to keep things light and casual. Before you tell him you love him, you have to tell him a lot of other things first.”
Tell him that you don’t believe in marriage,
tell him that you don’t care if you have kids
tell him, tell him, tell him all lies
“But I love him, why would I lie to him?”
“You need to show him that you’re not one of ‘those girls.’”
“What do you mean, ‘one of those girls’?”
“…Girls.”
You need to tell him that you love watching hockey
tell him that you play ‘Call Of Duty’
tell him that you’re a total nerd and you love reading comics
“But I don’t understand. I don’t even know what Call of Duty is. What if he asks me to play it with him.”
“Trust me, he’ll never ask you to play. He just wants you to appreciate all the time he spends playing it.”
“And if guys want to watch sports and sci fi all day, why don’t they just date each other?”
“Increasingly, they do. In fact, psychologists predict that eventually all men will become gay just to watch their favorite shows.”
“But for now, they still need sex. And when it comes to that. You have to seem fun, and up for anything.”
tell him that you are open to a three-way
tell him that you watch porn every day
tell him that you are not grossed out when he says the word panties.”
“Well what do you want us to call them?”
“UNDERWEAR.”
“Okay, so early on I have to lie to him a little. But once we’re dating we’re just honest with each other, right?”
“No. Then you enter a new phase of lies. I call it, maintaining the mystery.”
I know something about men
And they never want to know
how us women keep it all up
You have to hide it
If you want him to pine after you
Then you have to hide the things all women do
Tell him that you’re naturally hairless
Make him think that you never use the bathroom
And then when he’s asleep you can run to Starbucks
“Wait, I can never go to the bathroom?”
“No, of course not. I went away to Mexico with a guy once I spent so much time in the lobby bathroom people started tipping me. One night after a big dinner I had to fake a kidnapping just to get a couple hours alone. But it was worth it, because at the end of the trip he said I was one of the chillest girls he’d ever met and he would call me.”
“Did he?”
“It’s been a real crazy work year for him. We’re gonna hang out, real soon, though.”
“This all seems like a lot of deception, just to fall in love.”
“But here’s the deal, these are just the things we say until we do fall in love. When we met the one you can finally just be yourself and not worry about tricking him.”
Then you know it will be
true love from fairytales
You’ll both be happy
But if he tries to bail…
Tell him that you’re pregnant and it’s his kid
Tell him that you need to get married
Tell him, tell him, tell him right now