5 Scariest TV shows That Will Haunt Your Dreams!

With Halloween soon approaching I have compiled a list of the scariest TV shows and episodes. I know there are many other series but I made a point to pick shows that gave me actual nightmares. Episodes that made you look under the bed before you went to sleep, story lines that left my eyes bugged out like golf balls.  These are in no particular order. 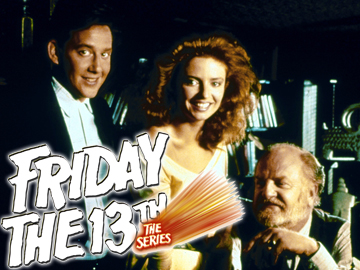 This series ran from 1987-1990. It involved Micki and Ryan who are cousins who inherit their uncle’s creepy antique store. The problem is their uncle made a deal with the devil and the items are cursed. This sets the duo on many missions tracking down the evil oddities.  The episode that sticks in my mind the most is called “The Inheritance” where they track down a doll that kills people for it’s master. The doll can also control other toys to do it’s biding.  I can’t tell you the harm this episode did to me as a tween who was still hanging on to some dolls and stuffed animals in her room.

2. TALES FROM THE CRYPT

TALES FROM THE CRYPT was an HBO production running from 1989-1996.  Being on HBO it was able to get away with more gore, violence and sexual situations.  The series boasted big Hollywood names guesting on the show like Ewan McGregor, Demi Moore, Meatloaf, Steve Buschemi and the list goes on and on.  One of the creepier episodes to stick out in my mind was with Christopher Reeve, Meatloaf and Judd Nelson  called What’s Cooking? The jist of the story is a failing restaurant has a big turn around with their new “Meatloaf” steak…get it…eewww.  And the part to give me nightmares was of course the Crypt Keeper himself with that rotting flesh of his.

Who didn’t love THE X-FILES?  Our favorite FBI investigators Sully and Mulder tracking down and trying to solve cases of the paranormal, spiritual  or just plain bizarre wacky crazy stuff.  Not every episode was scary of course but I had to put them on the list as the ultimate most freaky terrifying episode of all time for me was on this show.  The offending episode was called “Home”  *SPOILER ALERT*    It  involves an out of the way old house with no water/electricity.  A bunch of inbred sons. They procreate with their mother who is missing limbs and lives on a sleigh like device under the bed. She rolled out and back in from under her bed.  Yes, that episode was beyond horrific. Rod Sterling’s THE TWILIGHT ZONE ran in it’s first form from 1959-1964.  It was more a social commentary on issues like war, racism & government for example.  The episodes while not scary in the traditional sense always left you horrified in a different way. An episode that will never leave my mind was called “The Eye of the Beholder”.  It appeared the entire episode that the girl in bandages was hideous and had just underwent surgery to become beautiful. It was not until they take off the bandages do you realize that everyone else was gruesome looking and she was beautiful in our standards.  She then runs off into exile since the surgery was considered a failure. DOCTOR WHO has the honors of  one of the most original and terrifying creatures I’ve seen. The Weeping Angels.  Who would have known that a statue of an angel could evoke such fear. The Weeping Angels had a  defense system: quantum-locking, which caused them to turn into stone when being observed.  When not being observed, they could move  fast, incredibly super fast. However, this meant that they had to cover their eyes when in their stony form; if they saw each other they would be trapped forever.  Who didn’t watch this episode and became suddenly conscious of your blinking habits. I remember sitting there all dry eyed trying my hardest not to blink.  That is how scary the episode “Blink” was.

TV Recap: HOW I MET YOUR MOTHER: “Farhampton”

5 Scariest TV shows That Will Haunt Your Dreams!