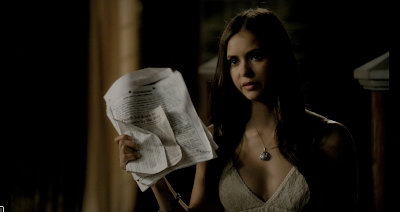 Last we saw Mystic Falls, Stefan had turned into a blood drug-addict, completely changed from the nice guy we’ve seen up until now. Damon was on death’s door, but luckily Katherine brought him Klaus’s blood to save him – just as Elena was literally kissing Damon goodbye!


This season promises to be “the season of the originals” but I know I can’t wait to see how Stefan’s transformation plays out with Klaus and especially how Elena and Damons friendship could turn into something more in his absence. Read the full recap after the break!


Apparently, all summer long Caroline and Tyler have been inseparable but not romantically linked, Jeremy’s been suffering in silence with his ghosts of girlfriends past, and Elena and Damon have been searching for Stefan with no real luck. Or rather, no real luck that Elena’s aware of. Damon and Alaric have been chasing every lead, tracking every alleged “animal attack” in hopes of finding and saving Stefan. 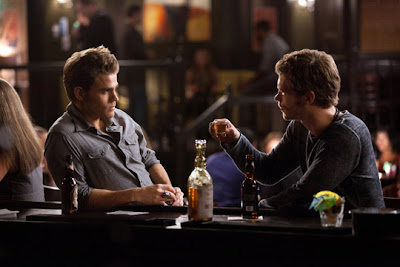 The carnage of Stefan “The Ripper” Salvatore is distinct – he feeds so hard that he essentially has rage blacks out and rips the bodies apart, then when he comes back he feels remorse and puts them back together. This was horrifically illustrated when Damon found the two bodies and one held fell off! Definitely wasn’t expecting that brutality from Stefan.


Not only is he doing Klaus’s bidding and killing humans, they’re on a quest to make an entire army of hybrid beings – werewolves turned vampire, so they have the strengths of both creatures. They stop in a bar to recruit a werewolf (Simon from 7th Heaven!) and torture him in public as if it’s no big deal. No one in the full bar does anything, because they thought this thing through – they compelled EVERYONE in the whole bar! So they’re free to torture him by making him a human dartboard, playing “truth or wolfsbane” drinking game, and no one stands up to question or stop them.


Meanwhile, as they’re torturing 7th Heaven Simon, Elena’s birthday party is in full swing. The whole high school population has come out for this “small” production and Elena is not pleased. She’s pretty much alone on her birthday since Caroline is too busy being upset about Tyler, Bonnie’s not in town for some reason (what was that reason again?), Jeremy is stoned to take the edge of being haunted, and Damon is having a complicated night with his compelled-fake-girlfriend.


Andie’s the last one in the office and that is  always a bad bad sign.  This scene is one of the creepiest on the show – the messing with the spotlight, the clicking/shoes walking sound that couldn’t be pinpointd, and Stefan’s slow reveal! Poor Andie never knew what was coming. Her death wasn’t as brutal as I thought it would be given it was at the hands of “The Ripper”, but still pretty damn unexpected. 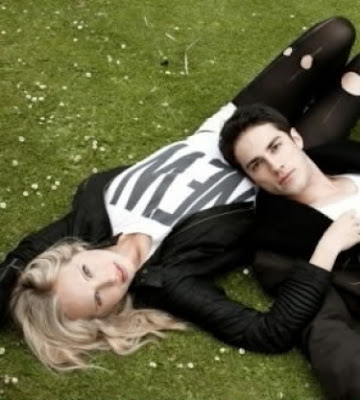 I was waffling between if Stefan was really, completely “The Ripper” or if he was just putting on an act to keep his friends and family safe, and Paul Wesley’s performance was so strong I was questioning it throughout. I’m so glad Stefan’s getting a much meatier and interesting storyline. He was a great good guy, but there’s only so much you can do with that. His final scene on the phone was heartbreaking! Before that call, I believed he had turned completely evil just as Damon now believes. Damn, good job.