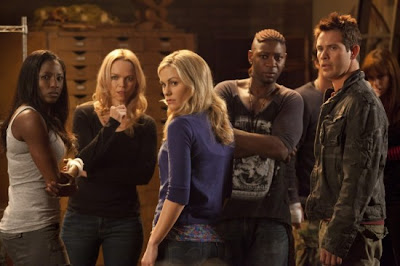 In the words of Lil’ Wayne, “Sorry 4 the Wait”, folks. I apologize for the delay but here’s the re-cap of last Sunday’s True Blood.
Episode 47 and counting… “Soul of Fire”
All of the several major story-lines in this epic seasonhave dwindled down into about only two. The first one being the battle, more like war, between the vampires andthe witches.  Led by their king, Bill,the vampire quartet of him, Eric, Pam and Jessica reach a stalemate when theyfirst arrive at the witch shop ready to do some major damage to it.  They are all stopped by Jason who warns themhis fairy sister, Sookie, is trapped inside among many others.  Bill and Eric both immediately agree tore-think their strategy much to Pam’s dismay.
Elsewhere, Sam and Alcide manage to force the whereabouts ofMarcus out of one of his pack members.  Withthe arrival of Luna, Sam and Alcide learn that Marcus has kidnapped her and hisdaughter.  We are then shown that Marcusintends to run away with not only his stolen daughter but a stolen girlfriendas well.  He tries consistently toconvince Debbie, Alcide’s woman, to come away with him.  She fights him but it can be seen that she maychange her mind at any moment.
Back at the shop, Marnie has gained total control overAntonia and killed one of her hostages who took a run at her.  Jesus comes up with a plan to force Antoniaout of Marnie’s body in order to weaken her enough to stop her.  He taps into some pretty dark magic whichforces his pretty scary “demon side” to show its very ugly face.
Upon learning of the vampire’s arrival, Marnie tries tostrike up a deal with them.  In exchangefor Sookie’s release, Bill and Eric must each face the true death.  A deal that both of them agree to, ratherquickly, to my surprise.  Pam andJessica, as well as Sookie, are shocked and completely against it.  With tears streaming down her face, Erickneels to take the bullet from Bill that will cause his existence to end.  But right before this suspense-filled eventis to happen, Pam snatches up a rocket launcher and fires it directly atMarnie.  The rocket explodes when it hitsthe magical protection barrier running around the shop.  Marnie and Sookie are left unharmed, alongwith all of the vamps, but Jason is critically wounded in the blast.
Andy, while desperately trying to find his way home afterbeing deserted by his cousin, randomly comes across a fairy.  She attacks him at first, thinking that he isa vampire due to his intake of “V”, but realizes he is human soon after.  Without rhyme or apparent reason, she mountshim when he awakes and begins to make love to him.  But before they begin, she makes him swear bythe light in her finger, that if they f**k, he must always protect her.  Of course he agrees and they have a little rompin the woods on the grass.  Congratulationsare in order to Andy, probably the only character on the show who hasn’t gottenany booty yet.
Sam, Luna and Alcide discover that Marcus and his daughterare at Alcide’s house with Debbie.  Theystorm in on Marcus and Debbie still having their conversation and a very heatedbrawl in sues between Sam and Marcus. Alcide allows them to fight without interruption but he is not veryhappy with Debbie at all.  Sam defeatsMarcus but decides not to kill him. Marcus then makes a grab for Sam’s gun but is stopped by Alcide whoquickly ends his life.  He then explainsto Debbie that they shall not be together any longer.  She pleads with him but it makes nodifference, he quickly silences her in his anger and storms out.
After the explosion at the witch shop, Eric is furious withPam and orders her from his sight. Jessica isn’t happy with Bill either but quickly finds a dying Jason andonce again feeds him her blood.  He eventuallyheals and the two stare at each other. Obviously their feelings are growing quite rapidly for each other.  Without warning, Marnie casts yet anotherspell, this time forcing the vampires to walk towards the protection barrier outsidethe shop against their will.  At the sametime, Jesus is nearing the completion of his own spell to force Antonia fromher body.  Its then suspense againstsuspense as we wait to see whose spell reaches completion first.  Jason tries his best to force the vampiresback but to no success.
Needing everyone’s life force, the hostages are forced byMarnie to join hands in a circle, including a reluctant Sookie.  As the vampires get closer and deadliercloser to the barrier which would end them as quickly as if they walked out inthe sun, the suspense grows.  Sookie’sfairy powers then reveal themselves yet again after she overhears Jason’sthoughts claiming that the vampires will die soon.  She breaks the spell and rescues thevampires.  Just as Marnie is about topunish Sookie for what she has done by way of death by fire, Jesus manages tocomplete his spell and relieves Marnie of Antonia.
With the protection barrier now broken, the vampires bustinside to do what they came to do. Marnie’s sole loyal follower suffers a death at the hands of Eric whorips his heart out and then uses one of the ventricles to suck its blood outlike a straw.  Pretty gross, yes, butalso very gangster.  It’s good to have theold Eric back.  King Bill then unloads afew rounds into Marnie and one into her head leaving her dead.
With everyone safe, they all return home.  Jesus and Lafayette revisit the night’sevents while preparing for bed.  Butright before Lafayette falls asleep, he sees a hovering apparition of Marniewhich quickly takes over his body.  Herewe go again.  The plot thickens evenfurther now leading into the last weekend of the fourth season.  With Marnie now apparently back, again, thegang will need to rally to defeat her once and for all.  I am also very anxious to see what storylinesare set into place for next year’s fifth season.  Last episode on the way folks. ‘Til then, goforth and do bad things.