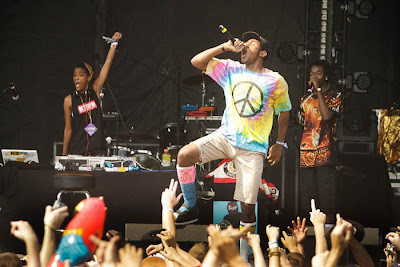 Adult Swim on Cartoon Network has acquired another show that will no doubt add to its already crazy and sometimes weird line-up.  The band ODD FUTURE will showcase their new show, LOITER SQUAD, on Adult Swim beginning next year.  It will be produced by well known Dickhouse Entertainment.

This production partnership was connected to another prank, crazy-antic TV show you might know of, JACKASS.  It is headed by Spike Jonze, Johnny Knoxville and Jeff Tremaine.

“Loiter Squad” is “a 15 minute live-action show that features sketches, man on the street segments, pranks and music from Odd Future Wolf Gang Kill Them All. The cast, featuring the Los Angeles collective of rappers, artists, and skateboarders, channel their multi-faceted creative talents in this off-the-wall showcase.”
To give a taste of what we might be in for, here’s video of  Odd Future puking at this year’s Primavera Sound festival, from Pitchfork.tv’s “60 Seconds Left”:

K.Flay's Official Remix of Young The Giant's "My Body" Out Today!

46 Views By Agents of Geek