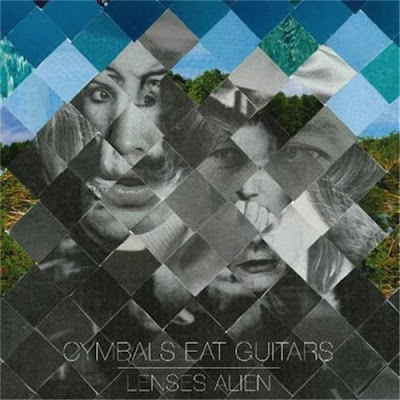 Darker and with sharper dynamics the sophomore album from Cymbals Eat Guitars see’s the New York indie rockers reach a highly placed milestone early on in the career.

What Lenses Alien does so well is that it takes everything that was great about the bands debut Why There Are Mountains, juices those qualities up and uses them to bust down a series of new doors enabling the band to expand even further on future efforts. One thing that jumps out immedieadtly when listening to this record is how finely tuned and well balanced the mix of tones is throughout. The equilibrium between rough and smooth is tuned to an almost scientific degree. The way snapping beats, dark fuzzy post hardcore guitar tones, delicate piano riffs and sweet vocal melodies congeal, gives the album a series of jagged edges which protect a heart of gold. Tracks where this is most prominent include “The Current” and epic album opener “Rifle Eyesight”.

This on its own is good enough but what deepens the experience and gives the album that extra depth is Joseph D’Agostino’s vocal delivery and lyricism. Granted his wordplay isn’t the finest out there but he does manage to engage and entice the listener with songs such as “Secret Family” breaking beneath the surface. Granted the 90’s alt rock influence is still ever present in the work of C.E.G but many of the structures, techniques and even additional instrumentation sees the band branching off into different areas. Elements of post rock not only add additional value to a series of incredibly well composed songs but also give the group the opportunity to branch out further afield in the future.

Enigmatic, ambitious and extremely well pieced together Lenses Alien is not only a successful second album but a pretty fantastic stand alone record too.

My Digital Pilgrimage - Part 2: Fly Me To The Moon