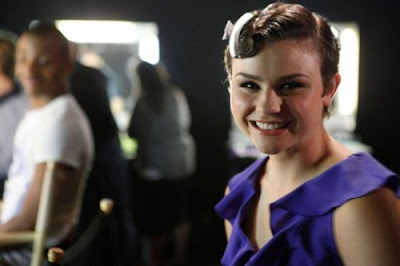 The Top 6 are being judged by the usual duo as well as Christina Applegate and Lil C. For time purposes, I may have to just not quote him at all, or I could be writing all night. The Top 6 are all strong, but I’m still a bit surprised to see Caitlynn there instead of Jordan. I just expected her to be there the whole time, it’s hard to adjust. Oh well, let’s get to tonight’s dancing!

Melanie
Melanie and All-Star Twitch
Nappy Tabs Little Red Hip Hop
Song: Roman’s Revenge by Nicki Minaj featuring Lil Wayne
Favorite contestant: check; favorite All-Star: check; one of my favorite choreographers: check; and my favorite Nicki Minaj song: check. Yep, LOVED IT. The judges thought the song was a difficult choice, but they agree that she did splendidly. Best comment: “Grandma, what a big talent you’ve got.” They all thought she did fabulously outside of her style and had that hardness and “buckness.”

Solo
Song: Cracks by Freesytlers featurin Belle Humble
What she just did with her body….I can’t believe those transitions from move to move! Standing ovation from the crowd! Apparently that was a last minute solo as well, which just makes it all the more incredible.

Sasha
Sasha and All-Star Kent
Tyce DiOrio Contemporary
Song: Fool of Me by Me’shell Ndegeocello
Sasha can put her finger against a wall and break hearts, Christina points out that she just shares her emotions and pain through her dance. This is ultimately what caused Jordan to go home, she could dance the moves but didn’t put the emotion and heart in it to connect with the routine’s storyline every time.

Marko
Marko and All-Star Jeannette
Dimitri Paso Doble
Song: Zorongo (Traditional)
Jeannette’s looking a little tooo skinnny! Mary thought he spot on with the arrogance and posturing. Mary had never seen that cape lift before and absolutely loved it. Nigel was left a little cold; he wanted more passion. Lil C loved that he was “all about the crotch” and was so connected and committed to the piece.

Solo
Song: Wonder World (Acoustic) by James Morrison
His movements are so fluid! The intro by his mom had me tearing up, such a lovely family and she’s just so proud of him! I’m sure it effects me more than most though because she reminds me so much of my mom. Pacific Islanders represent!

Ricky
Solo
After Tonight Justin Nozuka
He’s a great soloist and it’s gotten him much further in the competition than his partnered routines (especially with Ryan!), and once again it was so strong.

Ricky and Jamie
Dee Caspury Contemporary
Song: Inside the lines by Trent Dabbs
Lil C gave Ricky double kudos and props for the props on the conducting sticks. Christina loves him, but he doesn’t dance with intention at all times. Mary thought he was just bouncing off the piano keys in the song. Nigel still thinks he dances too high in his body, but Mary thinks he’ll be in the finale.

Tadd
Tadd and All-Star Elenore
Sonya Tayeh Jazz
Song: The Gulag Orkestar by Beirut
Nigel thought it was very interesting, but wanted to see more dancing that he was left “hanging” like Tadd at the end there. He’s still freaking out the judges with how good he is outside of his genre – pointed toes and great posture! Regardless of the risque positions, this was the most daring routine of the season because of that chandelier prop. It was pretty amazing, because if anything had gone wrong he would have been seriously hurt or at the very least, very obviously ruined the routine.

Solo
We Speak No Americano by Yolanda B Cool and Dcup
That definitely wasn’t his best solo, but he’s still so fun to watch. He definitely spent too long on a few tricks, rather than trying to throw in a little bit of more moves.

Caitlynn
Solo
Song: What’s Love Got to Do With It by Katie Thompson

Caitlynn and Pasha
Dimitri Samba
Song: Drop it Low (Districk 78 Remix) by Kat deLuna
Mary thought their Samba rolls and natural rolls were fabulous. The only complaint from the judges was her sexy faces, she should just be more natural since she already IS sexy. I didn’t notice the face problem so much and just loved how great the Samba was. There have been some pretty terrible Samba’s on this show, so whenever it pops up, even this late in the show, I get a little worried.

Sasha and Ricky
Kumari Sumage’s Whacking
Song: Schoolin’ Life by Beyonce
That was cute, but I don’t think I’m a big fan of whacking. All that arm movement just reminded me of cheerleading. Mary thought they did a good job, especially the “soul train groove”, but they weren’t up to the Princess Lockaroo level. Lil C noticed they were so focused on the steps and the routine, that they couldn’t channel the femininity of the dance. The one big complaint is that they seemed to be holding back when they whack, and they could have whacked harder. I never thought I’d be typing out whack so much!

Melanie and Tadd
Spencer Liff Broadway
Song: Where do i Begin Love Story by Shirley Bassey
Nigel had to point out her amazing solo and really, one of the best solos I’ve seen on the show. She’s back to being his favorite dancer on the show, because not only of her dancing but because of the little moments she brings to the dance like that breath in when he almost kisses her. Lil C says she’s a “quiet fire” and that her solo was so “beefy.” Tadd did great as well, but all the judges just gushed over Melanie and her solo.

Marko and Caitlynn
Sonya Tayeh Contemporary
Song: Heavy in Your Arms by Florence + The Machine
That move where she was on his shoulders and then the roll down to the floor – amazing! They had some great lifts and were so together in their movements. I loooove that Lil C explained his love for it in terms of Twitter hashtags! Double #buck. Christina thinks Marko is a beast, not just the ladies. The judges call this Caitlynn’s moment and it was her best routine on the show yet!

Elimination Prediction
It’s so hard to predict who will be going home! All the routines were so strong. The only thing I know for certain is that Melanie is staying around, and probably winning this whole thing. Between Sasha and Caitlynn, it’s hard to say because they both had one stand out routine and one that fell a little flat. I think overall Caitlynn had a better night, but the judges could keep Sasha around (or America could vote for her more) based off all her work in the previous weeks.

The guys I think is a little easier – Ricky’s got to be the one going home. Marko and Tadd had a standout night with at least one routine that set them apart. Ricky just didn’t get that lucky with the routine drawing, plus America never really warmed to him like they did for the other guys.

SDCC: THE DARKEST HOUR was my favorite footage from the entire con

SO YOU THINK YOU CAN DANCE Finale: Winners Decided

SO YOU THINK YOU CAN DANCE Top 4 Highlights

SO YOU THINK YOU CAN DANCE Top 8 Highlight