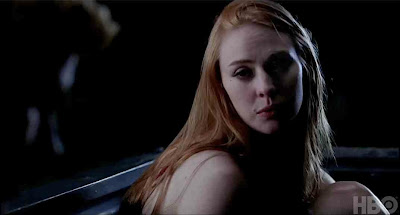 Episode 46 and counting… “Burning Down the House”
Our episode begins with a couple of revelations.  Well about two and a half if you really wantto be technical.  In stopping her newboy-toy, Eric, from introducing her past lover to the true death, she realizesthat she still very much loves Bill.  Asif the rest of us didn’t already know that. Another revelation is that the Antonia half of Marnie/Antonia feltextremely guilty about the killing of many innocent people due to herattack.  You can see the doubt as well asregret all over her face.  The third isthat although Eric now has all of his memories back, he actually stills loveSookie.  My only question to this is,although it’s all sorts of sweet of disgustingly romantic, what the hell isgoing on?  Did anyone ever see Eric, aViking badass, falling in love with a fairy? I know I didn’t.  Well I kind ofdid but was just hoping against hope that it didn’t.
Alcide is shownracing a beaten, broken and very bloody Tommy to the hospital.  He explains to the werewolf that his injuriesaren’t just from the beat down he received from his pack but do to his shiftinginto Sam as well.  He convinces Alcide totake him to see his brother one last time. Yes, I said one last time as Tommy will not see any more True Blood episodes as he dies holdingSam’s hand.  Sam and Alcide then decideto take on his now former pack to avenge the loss of the former’s brother whileDebbie wastes no time at all getting rather cozy with the pack leader himself.
Tara and the rest of the Marnie/Antonia followers are stilllocked away in her shop with no hope of ever leaving.  Little do they know that after what happened atthe Tolerance Rally, Bill decides to mount an all out offensive on the witchand her crew.  He wants to blow up thestore and rid himself and the world of Antonia for good.  During a moment of alone time between thetwo, we realize that Antonia is actually the half of them that wants to stopwhat they are doing.  She doesn’t want tocause anymore pain to the innocent.  Plusshe realizes that freeing the entire Earth of the undead will be a lot moretrying than she originally planned.  ButMarnie wants her to continue.  She wants to be used as Antonia’s vessel todo her bidding.  Reluctantly Antoniaagrees and decides to continue their mission against the vamps.
Jason finds himself feeling awfully guilty after having avery hot session of vampire sex with his best friend’s ex-girl.  Jessica tries to convince him that theyshouldn’t feel bad about what they had just done but this doesn’t work onJason.  After he, stupidly, asks her toglamour him so he can forget what had just happened, she takes some offense tothat and runs off.  I guess even vampirechicks get mad if you f**k them and try to kick them to the curb.  After this exchange between the two them, Jasonfinds himself having to bunk with Hoyt after his heart broken friend shows upat his door wanting out of the home where he and Jessica had made a life forthemselves.
Sookie enlists the help of Lafayette, Jesus and Jason to tryto free Tara and the others after she cannot convince Bill to stop his plan ofdestroying the witch shop.  Jesus managesto break through Marnie/Antonia’s protection spells surrounding the building byutilizing his demon-half powers, I guess that’s what they are called, andearning the trust of Antonia.  Onceinside, he too discovers that Marnie is willingly allowing Antonia to inhabither body to destroy the vampires.  Hetries to warn Sookie and the others but not before Tara tries to make a breakfor it and everyone is caught.
Having found some of Andy’s “V”, Terry takes his druggie cousinout to their old fort that they used to play at when they were kids.  Some quality time, target practice, family wrestlingand one long conversation later, Andy agrees to get better.  He promises to toss his “V” habits aside forgood and get clean.  I guess we’ll seejust how long this time lasts.
The entire episode comes to a close with Bill, Eric, Pam andJessica all decked out in some very dangerous looking black get-ups on arrivingat the witch shop with some very heavy artillery.  Will they succeed in their mission of completelyblowing up their nemesis?  Especially nowthat Sookie, the common love of Bill and Eric, is inside without theirknowledge.  Things continue to get prettyheavy on True Blood.  With only two episodes left in the season,can you guess what may happen?  If youdo, share it with the rest of us.  If youneed some inspiration in getting ideas, then go forth and do bad things.

Clips from 'ITS ALWAYS SUNNY'

Featurette for Marvel's THE AVENGERS