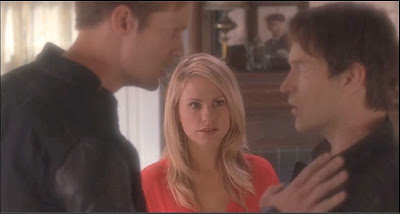 Episode 45 and counting…“Run”
Sookie is dying! Sookie is dying! No, not really.  Obviously they weren’t going to kill off themain character of the series.  Sookiesurvives and the first thing she does…has an erotic dream which begins withBill and Eric fighting over her and turns into a sexual threesome.  Who knew the goody-good had it in her?  What I was upset about is the way she justignored my boy Alcide.  He was the onethat rescued her from the fray between the vamps and witches in the firstplace. Putting his own relationship on the line, he brought her to safety.  Finally coming to grips with his ownfrustration and Sookie’s blind constant leaping into the direction of danger,he claims that he is “done” and walks out of her life.
Back at his own household, Debbie is up watching none otherthan Cheaters on T.V.  She pretends to be asleep as he slides intobed next to her.  She is obviously upsetand hurt that her boyfriend just couldn’t leave the mind-reader alone.  She falls off the wagon, begins taking “V”again and devises a plan of her own to set Sookie up by gaining her trust anddelivering her to Marnie/Antonia who has chosen to keep all of her followerslocked up against their will.  She hasalso casted another spell which has Eric under her control.  Seems she is definitely holding all of thecards, well at least the major ones right now.
Lafayette is still under the control of that dead woman,Mavis, in search of her baby and brings a stolen Mikey back to Hoyt’shouse.  The house was the same one thatshe lived in before she was killed. Confused and scared out of his mind when “she” points a gun at him, Hoytruns outside and notifies Jason.  Him,Andy, Terry and Arlene all race over to Hoyt’s place to rescue Mikey and get tothe bottom of the situation.  They callin reinforcements, Jesus, to help.  Hediscovers the real problem, learns of the woman’s troubled past and manages tocalm her down.  During some kind of magicalprocess which includes them digging up both hers and her babies’ body, shecomes to grip with how the two of their lives ended.  Now at peace, Mavis leaves Lafayettes‘ bodyand ascends, assumingly into heaven, with her baby in hand.
A sub-plot stemming from this encounter is Andy’s continuousissues with “V”.  He drank a significantamount before reporting to the scene and gets into a little scrape with hiscousin, Terry.  Jason recognizes thesymptons and doesn’t accept Andy’s worn out apologies for always messing up.  Sam and Luna go on a camping trip to make herdaughter forget about the confrontation with her father.  They seem to have a pretty good time and ofcourse wind up sexing it up in a tent. All the while, Tommy shifts into Sam and pays the werewolf pack leader alittle visit.  After some verydisrespectful words are exchanged, Tommy/Sam gets the crap beat out ofhim.
Luckily Alcide, who has just recently pledged his allegianceto the pack, all for Debbie, manages to pull him out of there.  But not before the beating he takes causeshim to shift back into his natural form. This discovery causes the pack leader and everyone else who participatedin the beating to step back in shock. They obviously thought they were kicking the dog S**t out of Sam.
Before he is forced out of his home at gunpoint, Hoyt placesall Jessica’s belongings into a box labeled “For you, Monster”.  Pretty harsh, huh?  He asks Jason to take it to her.  2+2= Jessica riding Jason pretty well in theback of his truck not too long after he tries to leave.  Surprise, surprise.  Nothing but drama will come from having sexwith your best friend’s ex-girl.  Lookslike it was fun though.
Sookie isn’t able to free Eric from his Marnie/Antonia prisonbut she manages to escape with some help from Tara, who seems to still verymuch be her best friend.  Much to Debbie’sdismay, Sookie survives her run-in with the Marnie/Antonia clan and thenproceeds to try to warn Bill of her master plan to interfere with a vampire “Tolerance”rally.  Many humans will be on hand andit’s the perfect place for her take over control of the vampires and have themslaughter as many humans as possible in front of a number of spectators.
With only three episodes left, things are really gearing upfor a major finale on True Blood.  With the eventual resentment of vampires bythe entire human race looming on the horizon thanks to Marnie/Antonia, thingswill only get worse before they get any better. Now there also seems to be some tension brewing between the Bellefleurcousins and the impending confrontation between Jason and Hoyt once he findsout Jason is porking his ex.  I wonder ifEric will return to his normal mindset of killing and not giving a flying f**kabout anything before the end of the season. New episode this Sunday, ‘til then go do bad things.

Ben Affleck to direct and star in first-person thriller LINE OF SIGHT?