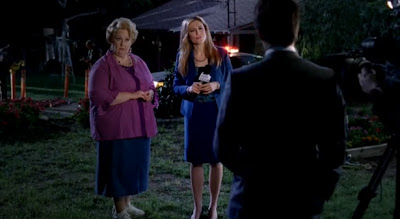 Episode 44 and counting…”Spellbound”
This week we’ll start things off a little different.  Since the episode began with how last week’sended… with Jessica about to be turned into a very crispy vampire by thesun.  Our resident hero, and member ofthe Bon Temps sheriff office, Jason comes to her rescue just in the nick oftime.  I began to question just how hemanaged to wrestle her to the floor, him being a mere human and all, but shequickly took over.  But not to resisthim, to deliver a kiss on his lips no doubt for saving her life.  To this inevitable gesture, he responds witha very passionate kiss of his own.  Hereturns her to her resting place besides Bill who states that they are foreverin his debt.
The drama surrounding Jessica certainly doesn’t endthere.  After ending his life in a veryvivid dream, she breaks up with Hoyt for real. Obviously he doesn’t take too kindly to having his heart being broken bythe vampire he cherishes.  Some prettyhurtful things get spurted from his lips before he revokes her invitation to “their”home.  Crying (or bleeding) all overherself, she goes to see Jason.  Uponhearing what she has done to his best friend and learning of her feelings forhim, he also takes back his invitation to her banning her from his home.  We all know what they say about a womanscorned.  I imagine what hell is about tobe unleashed by a vampire one.
Sookie and Eric have yet another rather intimate love-makingsession.  This time after they drink oneanother’s blood.  They fall into anotherone of those vampire blood induced fantasy worlds and wake up in bed,naked.  The audience then learns that shehas fallen in love with this new Eric. Beats me how someone can fall in love after only a few days (a week max)but it is fantasy TV after all.
After joining a new pack, Alcide and Debbie learn that theyare to stay out of the impending collision between the witches and vamps fromtheir pack leader.  Debbie voices more ofher concern to her boyfriend about Sookie. The conversation ultimately ends with Alcide reluctantly agreeing tostay away from Sookie forever.  Thispromise is extremely short-lived as he chases after her to warn her of thedanger she’s in because of this wiccan-fanger conflict.  His actions are all caught by the verywatchful eye of none other than Debbie.
Lafayette is not only visited again by the singing dead ladyhovering over Arlene and Terry’s baby boy but is possessed by her during adream he has about her past.  Apparently,that dirty looking doll that Mikey has been paling around with is what isconnecting her to him.  Surprise,surprise.  While being possessed by her,Lafayette breaks into the Bellefluer’s home and takes little Mikey along withthe old doll while his parents are asleep.
After kicking out his brother, Sam pays a visit to Luna to makeamends.  A visit which is interrupted byher ex and daughter’s father who is also the leader of Alcide and Debbie’s newpack.  Hmmm, the plot sure does know howto thicken around these parts.  Tommy onthe other hand uses his new skill to “skinwalk” to pose as Mrs. Forternberry inorder to sell her house and make a quick buck.  Oh Tommy, when will you ever learn?
After surviving the night, Bill contacts Marnie (herwitch-possessed version) and offers to meet in person to try to make amends forwhat happened to her all those many years ago. She agrees and they have a foggy confrontation in the cemetery.  Where else, right?  Sookie and Eric decide to join thefight.  She learns that her best friend,Tara, is on the other side of the battle lines which makes this storyline eventhat much better.  Of course, both Billand possessed Marnie arrive with super back-up and the melee ensues.  Eric strikes first killing one of Marnie’sfollowers while Bill prohibits Pam from ending Tara just in the nick of time.  Pam, obscenely pissed, runs off to find someother schmo to eat.  Sookie manages tothwart some witch following naysayer with her fairy powers before she catches astray bullet.  Who else than Alcide showsup to whisk her away, bullet wound still bleeding and all.  Wow, what an episode.
I’m exhausted just from writing about it.  I loved this week’s as well as all of theothers.  I know I say that every week butit’s the truth.  This has got to be oneof the better season’s going to date.  Onthe foreshadowing front, I feel that something will take place between Debbieand her new pack leader.  Seeing Alcidechase after Sookie will only further push her away and into someone else’s arms…orpaws.  There’s a small possibility of arift being formed between Sookie and Tara due to their completely oppositefeelings towards vampires.  Of coursethey won’t kill off the main character, so Sookie will somehow survive her gunshotwound and wake up to now having three men drool over her.  I also have a feeling that Jessica will gorogue now that she’s been shunned by the only two men she’s had feelingsfor.  Guess we’ll all find out startingwith the new episode this Sunday.  ‘Tilthen, go forth and do bad things.