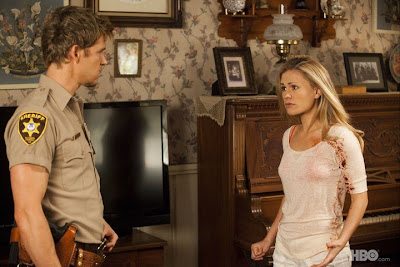 Episode 43 and counting…“Cold Grey Light of Dawn”
The full moon evening that took us to the end of the lastepisode also opens the beginning of this one. Sookie and Eric must really have been pretty backed up because they’relove fest lasted an awfully long time.  Beginningin the forest and ending in Sookie’s bed with different stops in-between, theymade sure they satisfied their sexual desire. They also enjoyed a nice cuddle session afterwards which got a littlecheesy for my tastes.  Still seeing Ericact like a perfect gentleman is very strange, and a little sickening attimes.
After joining a new pack, Alcide and Debbie stumble upon thetwo of them while they were still banging it out in the woods which leaves themwith some pretty precarious expressions on their faces.  Alcide looked somewhat disappointed whileDebbie looked disappointed at Alcide looking disappointed.  After being completely taken over by the mostfeared witch in vampire history, Marnie manages to escape her prison.  Bill isn’t very pleased to discover this ashe very well knows what will inevitably happen to all vampires with her on theloose.
Lafayette and Jesus decide to leave Jesus’ uncles placeafter the very weird occurrence from earlier in the evening.  Lafayette learns that he is a medium for deadpeople.  He can not only be used as avessel for them, similar to that of Marnie, but he can also see them.  As a matter of fact, he is nearly frightenedout of his skin by the sight of the same woman who Arlene’s baby, Mikey, cansee.  That portion of the episode wasespecially spooky to me.  The dead isreally starting to take over this show.   Tara, after narrowlingly escaping the clutchesof a very pissed off Pam, shoos her girlfriend out of Bon Temp for good inorder to keep her safe.  After some heavydrinking she comes across a possessed Marnie and learns of her new foundpower.  She recruits a team ofvampire-hating individuals and builds a team to stand by Marnie in a waragainst the vamps.
Sam learns of Luna’s pissed attitude when he tries tocontact her.  After a brief conversation,they solve the mystery to their misunderstanding.  Tommy can now shift into humans and thisrealization leaves both of them feeling very “uneasy” to say the least.  This uneasiness prompts Sam to have hadenough of his brother’s exploits and kicks him out of his life.  Pam tries her best to restore her skin byhaving the vampire doctor lady as I call her do a skin peel, literally, andinstruct her that she must inject a chemical into her body for the rest of herlife to assist with the healing process. The culmination of the episode has Bill order every vampire in the areato silver themselves to avoid “meeting the sun” should Marnie cast a spell overthem all.  She does just that but somehowJessica manages to escape her silver prison and makes her way toward thedaylight.  With Jason speeding towardsher rescue, the episode reaches its end. Will Jessica reach hers?
Truly the best episode of the season yet.  Between all of the witchcraft, unexplaineddead folk and epic climax at the end, the story is really heating up to animpending war between the witches and the fanged.  Knowing the authentic True Blood way, many of these stories will coincide with oneanother before the end of the season. Others will surely carry over into the next one.  Sunday never seemed so far away before.  ‘Til it arrives, go forth and do bad things.

Movie poster for THE ADVENTURES OF TINTIN