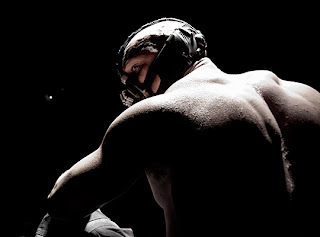 Footage from the shoot of The Dark Knight Rises has continued to leak, this time showing Tom Hardy, in character as Bane, deliver a speech to the people of Gotham.

The footage, it seems, shows Tom Hardy begin a monologue that will be heard by the audience of a ‘Gotham Rogues’ football match. However, he only makes it through the first line before the take ends.

The football stadium appears damaged as he says what I believe to be: “Behold! The instrument of your liberation!”

The film has been shooting at Pittsburgh’s teams’ stadium among other locations.

See the video here and let us know what this ‘instrument’ might be and why you think of his voice!