Movie trailer for IN TIME 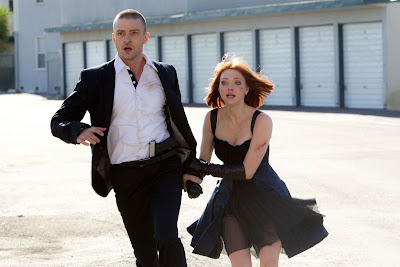 Justin Timberlake is obviously trying to expand his horizons. We haven’t heard any music from the once N*SYNC star in quite some time but he is definitely attempting to up his acting stock a bit. Last year, he played NAPSTER creator Sean Parker, this year we saw him get really close with the gorgeous Mila Kunis and now he’s starring alongside another hottie Amanda Seyfried in the action thriller IN TIME. It is slotted to hit movie houses this Halloween. So if you want some action with your trick r’ treating, here you are:

The film is set in a world where time has become a currency with the rich achieving immortality and never aging past 25. Accused of murder, Will Salas (Timberlake) has to go on the run and takes a hostage (Seyfried) with him until he can figure out how to clear his name, all while trying to bank the minutes he needs to stay alive. In an interesting twist, Wilde will play Will’s mother despite being four years younger than Timberlake (remember, no one ages past 25) with Kartheiser playing Seyfried’s Dad. Meanwhile, Murphy will play a law enforcer known as a “timekeeper” with Pennie, as his right hand man. Sounds like a pretty nifty little genre piece.

First look at Henry Cavill as MAN OF STEEL

Joss Whedon speaks on THE AVENGERS

YAKUZA PRINCESS Trailer Has Us Excited for September 3

Movie trailer for IN TIME