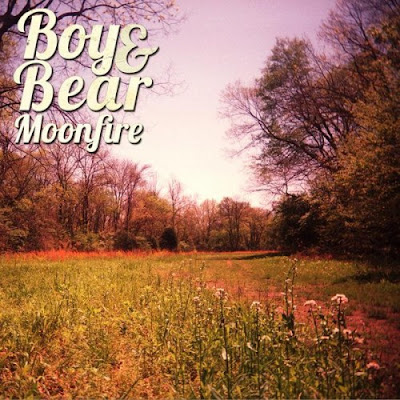 Joining the likes of Mumford and Sons and Fleet Foxes the latest band to emerge in the neo indie folk revival are Australian troupe Boy and Bear. Since forming in 2009 their name has been echoed from time to time but much like the album itself the launch of their debut LP hasnt caused much of a stir.

The record as a whole is pretty strong throughout, it is comprised of eleven solid songs the most of which have solid musical and vocal bodies to their name. However in a few instances they prove to be sturdy on the outside but somewhat hollow in the centre. Straightforward folk influenced instrumentation lies at the heart of each track and for the most part, the compositions and structure of the album is built upon well rounded and robust foundations. However apart from a few nice organ riffs and some pretty string arrangements on “Milk and Sticks” a lot of songs sound pretty bland. The over used components of stock folk rock leaves me thinking that I’ve heard this album so many times before. Even in terms of vocals this is the case, although frontman and group founder Dave Hosking has a solid voice it sounds very generic. And even though some of the hooks and choruses are quite catchy sometimes it feels a little too familiar. You just have to look at the chorus of Part Time Believer which shares a suspiciously uncanny resemblance to Americas “Horse With No Name” to see what I mean.

However I dont want to give the impression that I didnt enjoy this album at all, quite the contrary there are some songs on Moonfire which I found really good. The opening track “Lordy May” for example along with songs such as “Beach” which shows a more focused side to the album and “Feeding Line”, which shows a lot more flex in both its overall approach and direction. There is a certain whimsical charm to the group lyrically as well which shows that they can craft good, engaging tunes however it wouldn’t hurt if they could perhaps look at approaching their delivery from a different angle. If your a big fan of this genre then Boy and Bear will do many things to please you but if you’re still somewhat on the outside looking in they may not be the band to open the door for you.