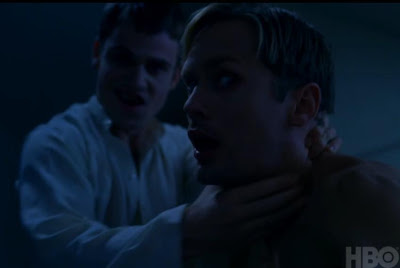 Episode 41 and counting…“I Hate You, I Love You”
So Sookie seems to be falling for the same man, wellvampire, that she used to absolutely loathe. Although Eric has become a character who has lost his “vampire balls”,he has begun to find a path into Ms. Stackhouse’s good graces, and her bed forthat matter.  Yeah, they didn’t have sexbut cuddling can be considered a very intimate activity.  Even between human and vampire.  Ms. Portia Bellefleur doesn’t seem to mindthat she has been boning her great-great-great-great grandfather in the form ofBill.  She even researched the topic andtried to convince King Compton that incest isn’t so bad and it’s a good idea tocontinue their sex-capades.  Bill quicklyglamour’s her into feeling the opposite and she runs away screaming.
Alcide, the resident werewolf, has found his owntrouble.  More like trouble has found himwhen the area Pack leader pays him a visit claiming that he never receivedAlcide’s registration.  Dismissing theless than cordial gentleman, you can tell that this wasn’t the last time Alcidewould be hearing from him.  After castinga spell on Pam causing her skin to continually rot, Marnie is abandoned byLafayette, Jesus and Tara.  She is takeninto custody by Bill so he can question her. After also glamouring her, he discovers that she cannot reverse thecondition that has been bestowed upon Pam. In addition to all of this, he also finally discovers that Eric has losthis memory and is hiding out at Sookie’s.
After finding Jason on the side of the road and healinghim by having him drink her blood, Jessica and Hoyt return him home.  He shares the “horrors” of his stay at thewerepanther camp.  He also begins having weirdsexual dreams about Jessica which include her boyfriend.  Yikes! Speaking of the couple who has been having some relationship problems,the issues and distance between them seems to be increasing after Jessicaoffers a chilly shoulder to Hoyt.  Arleneand Terry enlist the help of one of the town’s reverends who has now marriedTara’s mom, Lettie Mae Thornton when they suspect that aghost in their midst’s.  They think it’sthe ghosts of little Mikey’s real dad, Rene. Sam helps out his brother Tommy in a very big way after he kills hisfather and accidentally does the same to his mother.  They dispose of the dead bodies by way ofgators.
Oh, and the plot thickensor should I say will thicken nextweek when Bill walks in on Sookie… and Eric “interacting” on her couch.  This season keeps getting better by theweek.  I haven’t been this glued to theshow since season 1.  Even the smallerstories are becoming more and more interesting such as Arlene and Terry’spossible poltergeist.  I literallylaughed out loud when Jason asked Hoyt if Jessica had raped him too.  We should also find out very soon whathappens to Jason when the next full moon arrives.  Hopefully many of our answers will berevealed this Sunday.  So until then, goforth and do bad things.

SDCC: TUCKER & DALE VS. EVIL's Alan Tudyck and Tyler Labine chat with me for Gordon and the Whale