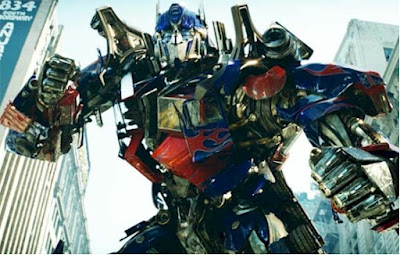 Despite all of the ongoing negativity of the previous TRANSFORMERS film, REVENGE OF THE FALLEN, the great and all-powerful Michael Bay has returned to bring us what is said to be the final piece in his trilogy. DARK OF THE MOON looked awfully awesome in pretty much all of its trailers. But, as I said to myself, someone who grew up watching the animated series on television and who also watched the entire original 1986 movie on You Tube one night for the heck of it, Bay’s films always look great in their trailers. This is true. Anyone care to disagree? But I simply couldn’t prevent myself from getting uber-excited as the release date drew nearer and nearer. I thoroughly enjoyed the first film and was slightly disappointed with the second. Hoping that they would bring a darker edge to the story and cut down on some of the comedy, I bought my ticket and sat in my seat.

The story to DARK OF THE MOON feels like it wants to be complicated, like it wants to be one of those science fiction plotlines that will keep you so fixated on every word that your eardrum might begin to bleed. But it’s not. It’s pretty basic and easy to follow. This is a good thing. A good thing because for a film such as this, you really want to just sit back and marvel at the special effects and action. In a nutshell, it has come to the attention of our hero Autobots that a spaceship from Cybertron, their home planet, actually crashed on the moon back in 1961. It has also come to the attention of our hero Autobots that there are humans that knew about this event and who failed to mention a word of it to anyone. Upon further investigation of the ship, Optimus and Ratchet discover another Autobot on it. I’ll use the word out-of-commission to describe the state that he laid in upon the ship.

Sentinel Prime, former leader of the Autobots, is brought back to Earth with some special information that Optimus and the others were, again, unaware of. We have humans trusting Decepticons and are then shocked when they didn’t get what they expected. News Flash: They are called DECEPTICONS, they are filled with deceit. In other parts of town, our favorite sometimes over-acter Sam Witwicky (Shia LaBeouf) has himself a new girlfriend. It may be debatable at this time and I’m sure there are several establishments all over the world discussing whether or not Carly (Rosie Huntington-Whiteley) is hotter than Michaela (Megan Fox), but the new girl is no slouch. We are shown this very early on as she is introduced by a camera shot of her ass. Yeah. Sam has recently graduated college and is now shacking up with said hot girlfriend who has pretty decent employment herself. Another note I wanted to point out is just how does Sam find himself with hot girl after hot girl? Movies, I guess, is the only logical explanation.

Anyways, feeling like he’s worthless after saving the world twice over, he discovers some info about the impending return of the Decepticons. He then rushes to tell his robot counterparts as well as the United States government who all seem more and more douche-baggery in every film. They scramble to devise a plan to counter it and let the CGI/Action-filled fun begin.

Ok, I want to be professional in stating my opinion of the special effects in this film, especially since I decided not to check it out in the bank account breaking 3D. But they were great. They were terrific. I mean yeah, all of the films had top notch effects but it felt like Bay paid extra attention to this one. There are parts, of course, where you can tell that CGI is being substituted but it still fit pretty decently. The always heavy detail on the giant robots were done very well. It really stood out whenever there was a slow-motion action scene where they zoomed in to allow the audience to catch every groove and surface blemish on their paint jobs.

The action was…a lot. It was non-stop action. I’m sure, I could be wrong because it lasted so long, but it seemed like the last 45 minutes to almost an hour of the film was dedicated to nothing but ongoing action scenes. It cut from action sequence to another without much delay at all. The collapsing building scene was done masterfully. It wasn’t a 4 or 5 minute destruction of a building. It was more like a 20-25 minute destruction of a building. Hard to tell but it looks like some of the actors did many of the above average stunts. Speaking of stunts, the wing suit portion came out like a gem. Having men glide their way down into the city of Chicago while military helicopters fell from the sky looked great on the big screen. The entire invasion of the Decepticons over Earth was visually wonderful.

Of course with so many pros, a film does have some cons. I don’t have too many gripes with this chapter in the franchise but some that I feel are noteworthy. I didn’t like some of the cheesy battle cries that Optimus let spill from his metal trap before engaging a Decepticon scum in battle. Even with his cool deep robot voice, “I’m coming for you” could not have been the best line that the script writers could have came up with. Also, he pleaded a little too much during the times that he found himself losing a fight. Optimus doesn’t plead. He’s is Optimus freaking Prime! He is the man. All of the Autobots want to be him. Even some men wish that they were him.

There was still plenty of comedy in this one but it was actually funny stuff. Unlike much of the cliché content that was in part 2, I actually found myself cracking up at plenty of the jokes. LaBeouf does a lot of screaming, some seems pretty unnecessary, but I still found it funny. His parents are always a treat, especially his mother played by Julie White and Ken Jeong, who had the very generic character name of Jerry Wang, brought his outlandish comedic prowess which worked pretty well with LaBeouf’s.

Part of me wanted to come into this review saying that DARK OF THE MOON is just more of the same. Yes, it has similar aspects from the previous two movies but what film franchise doesn’t? *Cough* Twilight*Cough*. It has that but also much more. Eagerly awaiting the potential backlash that I will receive from others for giving this film a positive review, I give TRANSFORMERS: DARK OF THE MOON “8.5 screams of ‘OPTIMUUSS!!’ from Shia LaBeouf out of 10”. That one was for you Brandon.

“Years from now they’re gonna ask: ‘Where were you when they took over the planet?’”