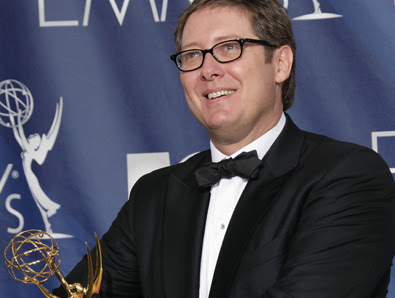 NBC has confirmed reports that James Spader will be appearing on the season finale of THE OFFICE. He will be one of the potentials competing for Micheal Scott’s (Steve Carell) job as boss. He might even go so far as contest Kathy Bates for the CEO spot of Dunder Miflin. Check out the press release below for details.

“James will reprise his role as Robert California, this uber-salesman that has a power to convince and manipulate, like a high-class weirdo Jedi warrior,” said Paul Lieberstein, one of the series’ executive producers and a series regular. “He’ll have been hired over the summer as the new manager, but within hours, got himself promoted. Within days, he took over the company. James has an energy that is completely his own, and ‘The Office’ has no tools for dealing with this guy. We’re thrilled he’s joining our cast.”

Some of Spader’s credits include: Steven Soderbergh’s “sex, lies and videotape,” which won him the Best Actor award at the Cannes Film Festival; David Croenenberg’s “Crash,” which won the Special Jury Prize at Cannes; and Steven Shainberg’s “Secretary,” which won the Independent Spirit Award for Best Feature. His other film credits include “2 Days in the Valley,” “Wolf,” and “Less Than Zero.” Spader will be shooting Steven Spielberg’s DreamWorks feature “Lincoln” later this year while he is shooting “The Office.”

From 2004-08, Spader won three Emmy awards for his seminal role as shameless attorney Alan Shore in “The Practice” and “Boston Legal,” making him the only actor to win consecutive Emmys playing the same character on two different series. He is represented at ICM and Melanie Cook.

From Deedle-Dee Productions, Reveille and Universal Media Studios comes the award-winning comedy series “The Office,” the hilarious documentary-style look into the humorous and sometimes poignant foolishness that plagues the world of 9-to-5 in the half-hour comedy based on the award-winning BBC hit. A fly-on-the-wall “docu-reality” parody about modern American office life, “The Office” delves into the lives of the workers at Dunder Miffflin, a paper supply company in Scranton, Pennsylvania.

Pam Beesly Halpert (Jenna Fischer, “Walk Hard,” “Blades of Glory”) is the former office receptionist now office administrator. Pam’s office romance with sales rep Jim Halpert (John Krasinski, “Away We Go” “It’s Complicated”) quickly evolved into marriage followed by the birth of their daughter Cecilia. Jim shares his working space with Dwight Schrute (Rainn Wilson, “The Rocker,”) the arrogant assistant to the regional manager whose responsibilities have expanded as the new owner of the office building. Ryan Howard (B.J. Novak, “Inglorious Basterds”) is the young, smart, former temp, whose fall from grace as a Dunder Mifflin executive quickly landed him back at the bottom of the food chain in Scranton. Andy Bernard (Ed Helms, “The Hangover”) is the preppy salesman and die-hard Cornell alumni whose endless and unique musical talents keep the office entertained. A surprising relationship has also formed between Andy and the ambitious distribution coordinator Darryl Philbin (Craig Robinson, “Hot Tub Time Machine”), who moved his office from the warehouse to the main floor alongside Michael and his staff.