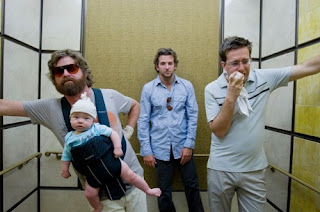 Zach Galifianakis, who played Alan in both The Hangover and The Hangover: Part 2, has released some minor details regarding the third and final instalment of the comedy franchise.

After The Hangover: Part 2 received criticism for following the same format as the first film, Galifianakis states that this last release will “not follow the same template” and is “very much a new idea.”
He states that the story will see the wolf pack attempting to break Alan out of a mental institution. How this links in to the theme of a hangover is uncertain yet, but one might speculate that Alan somehow ended up there after another heavy night from the group.
The release of The Hangover is likely to be summer of 2013.
Source: Rolling Stone

THE HANGOVER 3 Spoiler Forum – What Did You Think?

5 Must-See Movies in May