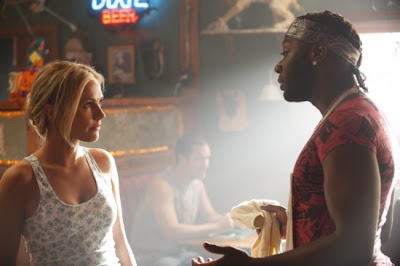 Episode 37 and counting…“She’s Not There”

So Sookie is a fairy or a fae or whatever you want to call her. Just don’t call her unattractive because that she is not. She gets a chance to visit what I call “Fairyland” or so she thought. Things quickly take a turn for the worse in a hurry when she is sought after by yet another group of supernatural beings. Her life just can’t be normal can it? She briefly reunites with her Grandfather (which to me was the most solemnly genuine character interaction of the episode) and returns home to discover that she has been away for an entire year. 12 and half months to be exact which only felt like 15 minutes to her. Her brother, Jason, has sold her house and become a full blown police officer. He seems to be all grown up.

Before we know it, the lead vamps of the series, Bill and Eric, both make their presence known to the Sook-ster. You can tell that although Bill has somewhat come to grips that his human soul mate no longer wants him, Sookie is obviously still quite in love with Mr. Compton. Lafayette’s boyfriend is trying to get him to dabble in the world of witchcraft. This leaves him and the rest of their new witchy circle of friends with a rather shocking enlightenment. This being having seen the dead raised in the form of a deceased parrot able to yet again take a brief flight before collapsing onto the floor. Tara is now “Toni” and a lesbian. Yeah, I said lesbian. I didn’t see that one coming. Although a very delightful development, unfortunately this does not bring her any closer to my dreams of her character finally getting naked. But it’s a long season, a guy can hope.

Meanwhile Arlene is freaking out her and Terry’s little one will grow up to be some sort of serial killer like his real dad, Rene. Sam has finally found some common friends who are just like him and my least favorite of the lot, Hoyt and Vanessa seem on their way to relationship trouble along a bumpy road. Eric and Bill are doing what they can to rebuild the trust between humans and vampires, now that Bill is, yes, a King. That would help me get over my long lost ex-girlfriend in a hurry too. Probably the most intriguing and looked- forward-to portion of the story is what Eric, now the owner of the Stackhouse estate, has in store for our damsel.

As usual, TRUE BLOOD delivers in bringing the suspense, fascination and lots and lots of foreshadowing to its loyal fans. The fourth season premiere ends leaving a pretty much naked Sookie in a pretty “fangy” predicament. I’m sure she’s about used to those by now. Apparently her end scene partner is receiving quite the love from the shows female demographic. Eric has plenty of women out there wishing he would penetrate them with his, uh, fangs. What? What did you think I was going to say? Luckily the show continues to stack its roster with many, many half naked very lovely ladies. This should help to more than balance out the power of gender sex appeal for us guys.

Looking forward to next week’s episode, which can actually be seen right this very second on HBOGO, I’ll be back again the following Monday with another recap of that episode. ‘Til then, go forth and do bad things.

What did you think about the Season Four premiere? Leave us a comment and let us know what you think!