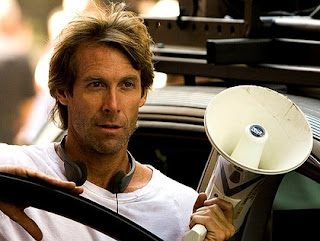 I received an anonymous package today that contained a script written by Michael Bay for a modern remake of the classic movie Casablanca. The script, penned last year, was to be developed in between Transformers: Revenge Of The Fallen and his third installment of the franchise, Dark Of The Moon, which comes out this week. It’s believed he wanted to make this into a film in order to restore his credibility after the terrible reception his last effort received from critics while at the same time giving the film a raunchy, sexy modern vibe that contemporary audiences will relate to. However, when funding for some of the film’s final explosive action scenes could not be secured, and when fears escalated that the former Playboy Bunny set for the lead role of Ilsa wasn’t of the legal sexual age, production grinded to a halt. However, now, with the surprise leak of the script, we are able to offer a glimpse into what Michael Bay’s Casablanca might have been like.

Here’s an excerpt from the script in which Ilsa, played by the aforementioned anonymous Playboy Bunny who was allegedly 15 years old at the time it was written, ends up in a bar run by an old flame, Rick. She asks the pianist, Sam, where he might be. 50 Cent was rumoured to play Sam while Paul Walker was in talks to play Rick after Justin Bieber dropped out due to commitment issues with Never Say Never. Here’s the scene:

ILSA, dressed only in a short skirt, high heels and a tight fitting white top with no bra underneath, walks over to a piano where a man, SAM, sits and skims through his music sheets. She seductively bends over the piano exposing the cleavage of her breasts and most of her thighs.

SAM:
Yes, ma’am. I here ya. A lot of water under the bridge and all that sheet.

ILSA:
Some of the old songs?

He plays a piano rendition of My Chemical Romance’s song ‘I’m Not Okay’.

SAM:
You be leavin’ him alone, Ilsa. You bad luck to him.

ILSA:
Play it once, Sam, for old times sake.

He starts to sing Linkin Park’s song when, suddenly, there’s an explosion and fire engulfs the club. Everyone panics and flees towards the door. Sam and Ilsa are about to do the same. However, as we drift into slow motion, they notice a beam snap from the roof and begin to fall from the structure. From the other side of the room, Rick, who is helping customers out of the club, sees the beam snap and charges towards them pushing the screaming Sam and Ilsa out of the way just in time. The beam lands on the piano and the instrument explodes into a bright orange flame. Rick lands on top of Ilsa with his hands on her breasts. They look longingly into each other’s eyes.

RICK:
Of all the gin joints in all the world, those just had to walk into mine.

Here’s another except from the film’s finale in which Rick and Louis escort Ilsa and Viktor Lazlo to the airport to escape from an alien invasion:

Skyscrapers crumble, buildings collapse and a plane falls from the sky against the backdrop of a mushroom cloud. A car rolls onto an airport runway out of the ash and dust. Rick, Viktor, Louis and Ilsa get out of it. Ilsa is still in her high heels despite the rubble that paves the floor, her short skirt now torn. She bends over the car while Rick talks to Louis

RICK:
Louis, take care of Mr. Lazlo’s luggage and put it on the plane.

He hands over a document.

RICK (Cont.):
Then fill out the names. The names are Mr. and Mrs. Lazlo.

Louis and Viktor exit off screen.

ILSA:
But I don’t understand! What about you, baby?

RICK:
I’m staying here until the plane gets safely away and you’re getting on that plane. If we stayed here, nine times out of ten we’d be killed by that evil Major Strasser and those aliens he unleashed.

A plane’s engine starts. Vikor shouts for Ilsa to hurry up as it’s taking off. She, alongside Rick, makes a slow-mo dash for the plane. Swinging onto the runway comes Major Strasser, in control of a BMW along with three soldiers who are dressed from head to toe in black armor. They all clutch semi-automatic weapons. Rick notices them and stops while Ilsa continues to run. He reaches into the back of his jacket and pulls out a grenade launcher.

RICK:
Here’s looking at you, motherfucker.

He fires a round towards the car, blowing it up just after Major Strasser has managed to jump out. He catches up with Ilsa who is now halfway up the platform of the plane.

Their eyes do not part as the doors close and Rick steps away to allow the plane to prepare for take off. Major Strasser crawls along the floor some distance away and reaches a rocket launcher that hangs out the trunk of the car.

MAJOR STRASSER:
Hope your overhead luggage is safely stowed, cause you’re in for a bumpy ride!

He aims the rocket launcher, but Louis notices and shouts for Rick to look out. Without hesitation, Rick spins around and fires another round from the grenade launcher and it hits Strasser, blowing him up. The plane takes off and Louis and Rick watch it ascend into the air.

RICK:
Louise, I think this might be the beginning of a beautiful friendship.

Linkin Park’s ‘What I’ve Done’ plays over the credits sequence.

You can even see some concept art from the opening shot of this sequence here:

So what did you think of those excerpts? Would you have liked to see Bay make this movie? Let us here your thoughts below!