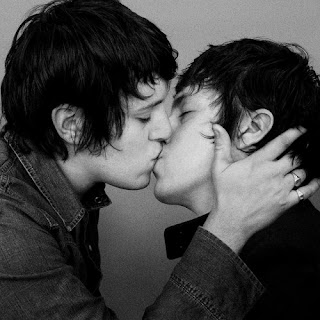 After being a part of french electro label Ed Banger since 2005 DJ and producer Sebastien finally see’s his debut album of solo material surface. After being responsible for remixing such artists as Kelis, The Kills and label mate Uffie 2011 sees the french beat maker distribute a full collection of his own material.

Although the album in places does end up all over the place there are two major sides to this LP. The first is Sebastien’s schizophrenic electro side where he throws a whole host of digital glitches, fidgety effects and high powered rezzed up bass lines into a blender. Sometimes this work’s well but the problem it has is the more you hear this side of him the more it all begins to blur into one sound and become unrecognisable. Granted some of the sounds he uses do leave an impression for example the metal guitar riff on “Doggg” and the strange gothic like harpsichord riffs on “Tetra” stick in your mind. But a lot of the compositions are borrowing sounds from the same sound pool as before, and although they are well executed you do get to a point where its hard to separate one bat shit crazy beat from another. This isn’t helped by the numerous interludes which span across the 22 track album. Each interlude shows promise and potential but cuts off abruptly before gaining any momentum, they sound like half finished tracks that Sebastien either hasn’t been able to or just hasn’t bothered to complete. Essentially they are filler, nothing more and ultimately they drag the album out longer than it needs to be.

Where this album shines best is when Sebastien initiates the other side of his musical palette, where he slows things down a notch and works on creating some house influenced almost nu disco like grooves, which when he gets right he nails it. Tracks like “Arabest” , “Embody” and “Love In Motion” (which features Mayer Hawthorne”) are sleek, sexy and show that with a bit more concentration and focus Sebastien can accomplish great things.

Total shows that Sebastien has knowledge of what he is doing and passion for the music he produces it just lacks discipline and direction. His music, like many other artists may not be to everybody’s liking but its clear that he has a good ear for what he does. I do feel a little dissapointed by the album because I know that Sebastien has enough ability and experience to make something better than this.

LA Invasion: Have You Heard About the CATbaret?

Gobbledygeek – Episode 158: My Body Is a Road Map of Pain