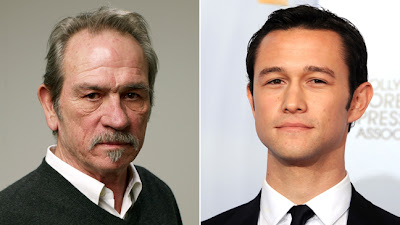 The new film based upon the late President Lincoln, which is directed by the great Steven Spielberg, has gathered new cast members. Tommy Lee Jones, Joseph Gordon-Levitt, James Spader, John Hawkes, Tim Blake Nelson, Bruce McGill and Joseph Cross are all in talks to climb aboard that already has seasoned vet Daniel Day-Lewis playing the bearded President.

Other actors that are reportedly set to join the roster are David ostabile, Byron Jennings, Dakin Matthews, Boris McGiver, Gloria Reuben, Jeremy Strong and David Warshofsky. The film itself is based upon the book TEAM OF RIVALS: THE POLITICAL GENUIS OF ABRAHAM LINCOLN. Another acting vet Sally Field will play Lincoln’s wife, Mary Todd. Jones will play Thaddeus Stevens, who is “a Republican leader and congressman from Pennsylvania. Stevens was a staunch supporter of abolishing slavery and was critical to writing the legislation that funded the American Civil War.” Gordon-Levitt is to play Robert Todd Lincoln, the “eldest son of President Lincoln and the only one to live past his teenage years.”

The story of the film follows “Lincoln’s journey to abolish slavery and end the Civil War.” Virginia has been determined as the spot for filming which should begin fall of this year and be released late next year.

It would seem with names like Day-Lewis, Field, Jones and Spielberg directing, that this film has a dream team creating it. Being able to see President Lincoln’s journey to achieve freedom for Blacks during the time of slavery and the civil war should be great to see on screen.

Lend us your thoughts on these casting choices and whether your looking forward to this potentially epic film or not.

Andrew Garfield in costume as THE AMAZING SPIDER-MAN