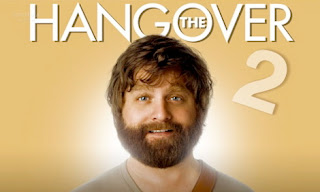 The Hangover was one of the best mainstream summer comedies that recent years have brought us. It’s a great tale of friendship mixed with laugh out loud humor, terrific writing and a wonderful insight into people on the cusp of adulthood and the responsibility that comes with it. However, the exciting party that was the first film has ended and now the hangover has kicked in.

While the first one’s simplistic yet clever structure made for a surprisingly fresh comedy, The Hangover 2 basically takes the exact same format of the first film and re-writes it with a few new characters, a new location and switches Mike Tyson’s tiger for a Russian mobster’s drug dealing monkey. Hell, even the photograph slideshow, which was a jaw-achingly hilarious ending to the last movie, makes a return here!

However, having watched the trailer prior to entering the movie, I was already aware that this would probably be the case and told myself that, perhaps, there’s no point for writer and director Todd Philips to fix what isn’t broken. The only problem is that, frankly, while it worked the first time around it doesn’t quite come off in this sequel.

First of all, the bond between the characters in the first The Hangover was so strong that it perfectly glued together the somewhat episodic narrative. Here, however, the relationships are just extensions of what occurred in the first movie. Similarly, the set pieces that the characters found themselves in continued to be hilarious and unexpected from start to finish in the first installment. I mean, who can forget the moment that Mike Tyson turned up in The Hangover in that fantastic and now something of a classic cameo? Nonetheless, for this much-anticipated sequel, it almost feels as if Todd Phillips just threw together a bunch of predictable ideas and mediocre gags here with little interest in matching the hilarity of its predecessor.

In many ways, the film is so lacking in new, fresh, original thoughts and so empty of passion that it feels like it should be the fourth or fifth entry from a franchise, not the second.

That doesn’t mean that The Hangover 2 doesn’t provide any entertainment and is completely void of laughter. There are moments that capture the glory what Phillips achieved with his unexpected comedy success back in 2009, a few of Zach Galifiniakis’ lines in particular rival some of the awkward genius that his character Alan became notorious for, but they don’t come as fast or hard as before.

Moreover, the moments in between the gags lack the X-factor that Phillips acquired in his previous movie to make his storytelling just as exciting as his writing was comical.

The Hangover may have transformed something that, for me, is generally a rather painful experience into a work of comic genius. But, this time around, Todd Phillips has created a piece of film-making that has more in common with my own experiences of waking up after a rough night: It’s confusing, nauseating and makes me regret making the venture in the first place.

☆☆☆
No film that has Paul Giamatti in can ever have a rating below 2/5…
…But this comes pretty close.

THE HANGOVER 3 Spoiler Forum – What Did You Think?

5 Must-See Movies in May