Codes and Keys by Death Cab For Cutie – album review 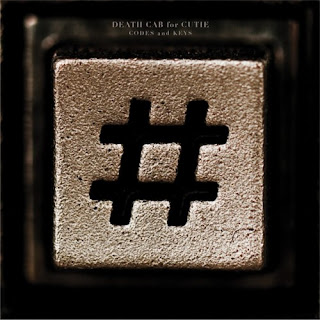 Codes and Keys is the seventh studio album from Washington DC’s Death Cab For Cutie, its their first LP in three years and for Death Cab fans the wait between this and their last record Narrow Stairs has only built up the anticipation for the bands return.
Fans of Death cabs former work will be pleased to hear that this album is steeped within the traditional sounds of their former work. The catchy indie pop quality that has built up their fan base over the last 13 years is definetly a big part of this album but they also manage to keep things moving with a healthy dose of experimentation. Unlike their last album Codes and Keys plays around more with instrumentation and composition than it does texture. The somewhat darker tones of Narrow Stairs have been swapped out for a lighter vibe with more focus on timbre. The jazz influenced percussion on “Home Is A Fire”, the bowed strings on the albums title track and the digital ambience on “Unobstructed Views” are certified proof that sometimes its the little things which can make a big difference. Death Cab have had a history of making little changes and showing you can develop and grow without overhauling everything.

In fact I think the mantra for this whole album is that “little things do make a big difference”, the way a lot of songs on this record are structured allow for small ideas, motifs, riffs and patterns to make tracks sound bigger in both scope and scale. For example the way different synth sounds provide a stronger atmosphere on “Unobstructed Views” or the way the reversed guitar fx and piano riffs throw more meat onto the bones of “You Are A Tourist”. All of these little difference makers are enhanced by the way each part is recorded and the general production value of the album which is (as expected) pretty damn good.Although this album on a musical frontier feels very tightly constructed and built with love it feels like the lyrics on Codes and Keys have taken a bit of back seat. One of the things I loved most about previous Death Cab albums is Ben Gibbard’s songwriting, he is one of my favourite lyricists and whenever the group put out new material its one of the things I look forward to most. Although the quality of songwriting isn’t bad by any means, it just dosent seem to have as much bite or soul as I was expecting or hoping for.

Although somewhat dissapointed with the songwriting on Codes and Keys it might be a factor that becomes less of an issue in the future. I was initially a bit sceptical about some of the songs at the latter end of the album, but my issues with them have begun to fade after a few listens. Which leads me nicely to my concluding point about Codes and Keys, I can see why some people might feel a little underwhelmed with this LP at first listen but stick with it. Listen to it a couple of times before settling on a final verdict, theres a lot going on in this album. New ideas and artistic directions coupled with layering of sound can sometimes be a bit tricky to get a handle on right away but the more I listen to Codes and Keys the more I enjoy it. Although its not up quite up there with the likes of “Plans” or “Transatlanticism”, Codes and Keys is definetly my favourite new Death Cab material for quite some time.

Peter Bjorn and John announce fall "All You Can Eat Tour"

Which movies are worth watching for college students in 2019?

Enter to Win an ALL IS BRIGHT Signed Poster & Blu-Ray Prize Pack!

Codes and Keys by Death Cab For Cutie – album review