Will Smith and son Jaden to appear in Shyamalan’s latest. 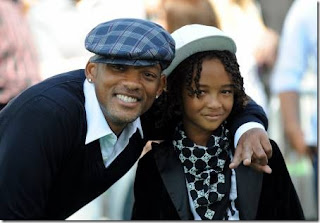 Coming off the back of three Razzie wins for Worst Picture, Worst Director and Worst Screenplay after the disaster that was last summer’s The Last Airbender, the love for M Night Shyamalan is about as non-existent as North Korean democracy.

But, that hasn’t stopped the controversial director, because he’s already starting to work on a new science fiction movie that will reunite the Smiths. Nope, unfortunately, we’re not talking about the Manchester rock band here. Instead, we’re talking about actors Will Smith and his son Jaden Smith.
The film will be set 1000 years in the future and see a father and son crash land on a deserted planet Earth.
This will be the second time Will and Jaden have appeared on screen together following 2006’s melodrama The Pursuit Of Happyness. Jaden was also the star of last year’s remake of The Karate Kid.
The script for this as of yet untitled feature has been penned by Shyamalan alongside The Book Of Eli scribe Gary Whitta.
Looking forward to seeing the Smiths back on screen? Is anyone excited about more Shyamalan?
Source: Variety

House Of Balloons by The Weeknd - album review

SOUTHPAW Uses Every Cliche in the Book – Movie Review

Will Smith and Shawn Levy Join CITY THAT SAILED

6 Of The Worst Superhero Games Ever Made

Will Smith and son Jaden to appear in Shyamalan’s latest.