Raven In The Grave by The Raveonettes – album review 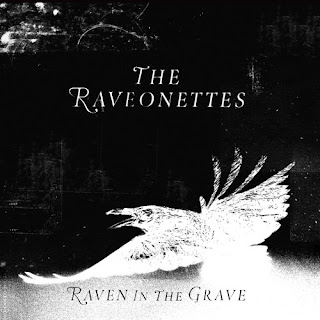 As lovely as im sure Denmark is its not really a country at the forefront of the musical cusp, however having said that Danish natives The Raveonettes were at least for a while a band that had people talking. After dipping back into obscurity for a while the duo hope to return to the forefront of the indie rock scene with this their fifth studio album. However its going to take a lot more than what this album offers to submerge once more into the spotlight.
Initially arriving back in 2003 with their distinct and catchy debut album Chain Gang Of Love The Raveonettes showed somewhat of a musical flair by bonding 50’s rock and roll culture with post rock and  distorted rockabilly sounds. Although they implement elements of that sound here and there on Raven In The Grave they seem to have all but removed the black leather swagger and biker rebel in love attitude that made their first album stand out. Over the years they’ve gradually been moving away from that but listening to this album its clear they want to distance themselves from the band they were eight years ago. Although I admire the want to progress and experiment I find myself missing the band that were hammering out those dirty riffs and big choruses. On this record they have delved deeply into two distinct categories the first being a very cold and frosty post punk/shoegaze style which indulges in way too much reverb for both the guitar and the vocals. This is a technique thats used practically throughout the whole album and although it does work to a degree in some places it feels very isolated and disjointed for a lot of the time. Especially when they throw elements of 80’s pop into the mix, it feels a little forced and messy at points.

However there are some good moments on here as well, granted they take the form of certain riffs, motifs or ideas but tracks like “Apparitions” has a certified eerie quality to it and actually does benefit from meshing together the previously mentioned elements. The Raveonettes are clearly a band who are trying to alter both their style and approach and there is definetly a lot of potential on this album, it houses some really solid moments which show the group can create and manipulate atmospheres they just need to take some time to reevaluate their execution in certain areas and look towards creating more substance than style.

NewsCast Episode 7 - HANNA, HOBO WITH A SHOTGUN and ARTHUR

Reeves takes on Eight O'Clock In The Morning

Raven In The Grave by The Raveonettes – album review