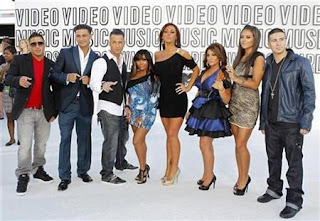 The super highly anticipated next season of MTV’s JERSEY SHORE is set to be filmed in the historic, culture-oriented city of Florence, Italy. The cast of favorite guido’s & guidette’s are set to arrive in Italy on May 9th. They’re excited and ready to go and no doubt the show’s fans are just as excited and ready to watch them tackle Florence. But the question is will everyone remain just as excited after discovering certain criteria that must be followed?

Florence Mayor Matteo Renzi has set some guidelines and laws for the gang to abide by if they want to reside in his beloved city. To name a few, the show is not allowed to film them drinking in public including any bars. They aren’t allowed to pay any visits to any of the citys historical landmarks and they must interact with actual “authentic Italian people”.

“I will not allow them to use the Palazzo Vecchio or other historic buildings,” Florence Mayor Matteo Renzi told the Italian newspaper Corriere della Sera, “but I cannot ban them from using our city as a set.”

Apparently the show has just begun to be aired by Italian MTV in their country and the reaction by the news media has been less than favorable. I’m interested in seeing how they will all adapt to these rules and restrictions. Also, will these new aspects make the show even worthy of watching anymore? Obviously the majority of the intrigue of the show stems from the drinking, partying and seeking out of someone to smush. Maybe this will be a good thing and spare us from the ever ticking time bomb that is Ron and Sam. I suppose we will find out in due time.

How do you feel about these new developments? Will you continue to watch the show knowing that a large part of the popular content will be removed?

Film adaptation for BATMAN: YEAR ONE