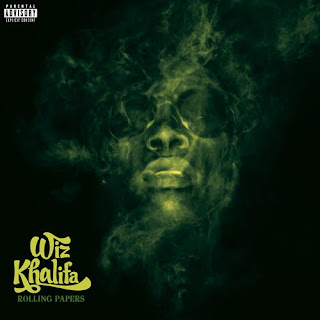 Wiz Khalifa likes drugs and partying, actually scratch that Wiz Khalifa loves drugs and partying. If you weren’t aware of this beforehand by the end of Rolling Papers you will be convinced that the young Pittsburgh MC is quite possibly the worlds most involved weed connoisseur. He is a young guy enjoying the fruits of his labour and enjoying life, so if you’re looking for something deeper than a good time party album you’ll probably want to move along.

Khalifa’s history with major labels and the industry as a whole has been very up and down, right now due to a successful string of mixtape’s and the breakthrough single “Black and Yellow” he is enjoying a constant rise in popularity. If you were to compile a list of young artists who are certified hot and beloved by the bloggers right now Wiz’s name wouldn’t be far from the top. But longevity is a fickle beast especially in Hip Hop where it seems everyday five new names eek out into the marketplace looking to topple the current front runners. Its here that despite its happy go lucky and laid back nature Rolling Papers as a whole might be a hindrance to the development of Khalifa’s career. The lyrical content on this album is extremely limited, in fact it rarely ever ventures outside the themes of  smoking weed and drinking. Although the lyrical content fits with the musical direction of the album I get the feeling that there isn’t much more to Wiz, if there is he certainly dosent show it on this album. Im sure that this album will continue his current success but that might lead him to never leaving his comfort zone and thus making it hard to excel in the future.

But keeping it in the here and now theres quite a lot to like about Rolling Papers, most of my enjoyment came from the beats. There is a real hazy, and woozy quality to a lot of the tracks featured on this album. Sleazy synths, with wishy washy rhythms and drum beats that click and pop. A big part of the overall production ventures into areas which sound like a lot of Southern Hip Hop fundamentals have been glossed over with psychedelic elements. As much as I liked this style and some of the catchier elements found in tracks like “Roll Up” musically the album follows a similar path to the lyrical content. As it transcends deeper into the second half the record seems to unfold and towards the end Rolling Papers begins to over indulge.

I have to be honest although there are moments scattered here and there Khalifas vocal presence, delivery and flow didnt really stand out to me. Granted his style is laid back and that blends in with the musical direction after a while it begins to feel drowsy and its initial impact starts to wear off. Overall some good moments here but the shine is worn off by an album that dosent know when to say stop. A promising talent for sure but I believe some revaluation is needed before he makes his next move.