PG-13 rated THE KING’S SPEECH gets a family friendly poster. But is the whole idea an f’in disaster? 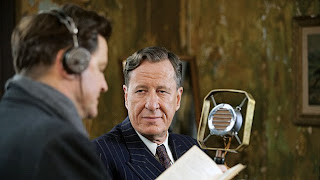 THE KING’S SPEECH is one of the highest grossing, well-loved and critically acclaimed British films of the last few years. Plus, if stealing the hearts, and wallets, of the world’s movie-goers isn’t enough, it also took home to most prestigious award in all of cinema: The Academy Award for Best Picture. Yep, that same little golden statue that the likes of Steven Spielberg grasped for Schindler’s List, Francis Ford Coppola clasped for The Godfather and Billy Wilder cherished for The Apartment.

So where do the film’s producers Harvey and Bob Weinstein go to next when they’ve already dominated all four of the main fields that film hoped to seize? Well, apparently, you just aim for the younger demographic! And how exactly do you do that? You take the scene that gave the film an R rating, although it may be one of the movie’s brightest and most memorable moments, and you axe it out like some overgrown weed in a garden allotment to receive a PG-13.
That’s right, in the run up to the Oscars the two controversial producers made the shocking decision to cut the scene in which King George is encouraged by Lionel Logue to swear as its the only way he can communicate without stammering in order to re-release the film with a more lenient rating. This newly edited version comes out this weekend and here is the poster to advertise it: 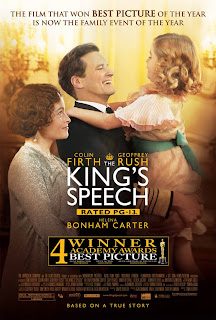 Do you get it? It’s the family friendly version so the poster is a picture of the characters as a happy smiley family? You see? You can tell the advertisers lost sleep over this one. I mean, call Don Draper or one of the other Mad Men cause I think we have a work of genius here.
Not only does this entire thing strike me as a blatant case of the Weinsteins licking the last crumbs of food from the bowl, however, but to quote Jimmy Kimmel’s sarcastic comments on national TV this week, “What 12 year old kid wouldn’t want to see a movie about a royal vocal coach?” When I was 12 years old, the last thing that I would have wanted to see would have been The King’s Speech. At that age, I still thought that Spider-Man was one of the best films ever made and that Adam Sandler was a very funny man. Surely, not a lot has changed since the start of the millennium in regards to children’s film tastes. Except maybe the thinking Adam Sandler is funny part.
Furthermore, it once again brings up the age old battle of artistic integrity versus money making. The director, Tom Hooper, has often hinted at his disappointment in the decision to cut the famous scene from the film because of, one assumes, the effect it would have on the movie’s effect. After all, The King’s Speech was written in a certain way by David Seidler and even the most unaware of film viewers will understand that every scene, every line of dialogue and every frame of a shot, is intensely examined by the film-makers to help achieve the desired overall effect. So why should you cut one?
But, most of all, is there actually any point to the decision? When I was 12 years old, the first album I ever purchased was Blink 182’s well-loved ‘Take Off Your Pants And Jacket’. At first, I went into my local record store and was told that I could only buy the sanitised version in which all the swearing was faded out. Not really wanting to hear this version, I instead ordered the explicit one off the internet for the exact same price. The moral of this story is: If you’re a 12 year old who wants to see The King’s Speech, we live in an era of downloads, file sharing and streaming and so it’s just as easy to see the original version somewhere.
Similarly, what’s so wrong with a bit of swearing? It’s not like The King’s Speech is in the same league as In The Loop or Pulp Fiction where the language is both endless and strong. Those of you who have seen the film will know that it comes in one quick, harmless burst that is intended to have a comic effect. Moreover, I listened to that aforementioned Blink 182 album over and over again for months and I reckon I’ve turned out to be a pretty decent guy. What harm does swearing do anyway?
Will you take your kids to see it? Is it a good idea? Does it matter if your kids here the word ‘fuck’? Is this whole project an insult to what Hooper and The King’s Speech team created? I mean, why fix what’s not broken, right?
Let me hear your thoughts!
Source: Rope Of Silicon

Monsters Inc. goes back to school for MONSTERS UNIVERSITY.

THE DISAPPEARANCE OF ELEANOR RIGBY: THEM Movie Review

GRACE OF MONACO Trailer – Nicole Kidman Looks Gorgeous, But That’s About It

Oscar Watching: Bidding This Season Farewell, Looking to the Year Ahead

PG-13 rated THE KING’S SPEECH gets a family friendly poster. But is the whole idea an f’in disaster?