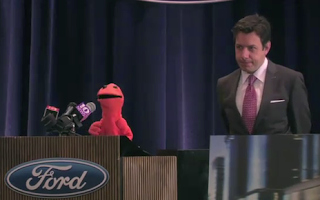 As well as working on Bridesmaids and the final season of The Office, director Paul Feig has been filming a series of short adverts for Ford along with an all-star team of comedy writers.

The adverts make up the story of a courageous yet publicity shy orange puppet named Doug who has miraculously come to the rescue of several citizens and become a media phenomenon.
Writing credits for the advert go to The Simpsons writer Donick Cary, Finding Nemo scribe Dave Reynolds, Borat writer Eric Leiderman and many, many more.
Feig is also known for directing episodes of Weeds, 30 Rock and Arrested Development.
Check out the videos below!

PG: PSYCHO GOREMAN Movie Review – An Entertaining Curiosity That Deserves to Be Seen