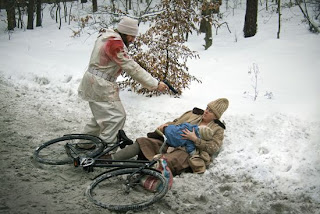 One of the biggest hits at the Venice Film Festival in 2010, ESSENTIAL KILLING is an action film that sees Hollywood’s enigmatic black sheep, Vincent Gallo, play a Taliban terrorist captured by the U.S. army. After being able to escape when their convoy is involved in a road accident, however, he must stay a step ahead of the soldiers closing in behind him and do everything he can to survive.
Director: Jerzy Skolimowski
Year: 2011
One of the things that intrigued me about Essential Killing and, therefore, lead me to watch the film was the way that the conventional binary code for this genre of narrative – the army being the protagonists and the terrorists being the antagonists – has been completely turned on its head here. Instead, we are forced to, rather controversially, focus on the terrorist and place ourselves in his shoes and understand his perception of the world around him.
However, upon watching the movie, it became clear that my preconception of Essential Killing’s narrative was utterly misguided. Yes, the movie does focus on the character of a Taliban member, but it’s got so little do to with politics that you almost forget this fact after the opening fifteen minutes. After all, there’s no mention of names, no mention of organizations, no familiar places, barely any dialogue and it’s pretty much entirely void of exposition.
Instead of its politics, what drives the film forward, therefore, is watching Vincent Gallo’s character do everything he can to survive the winter terrain in his escape from the pursuing army.
Jerzy Skolimowski’s film almost entirely focuses on the drive this character has to stay alive as he searches whatever warmth, food and water he can find in order to survive. But more than that, Essential Killing focusses on the way that Mohammed is forced to kill anything that stands in his or may prevent his survival. This is where the title and the main moral question of the film arise; would you kill someone if they, in some way, may prevent you from living your own life? In the opening scene in which Mohammed is being cornered by the U.S. army, he decides to fire a rocket launcher at them in order to escape and survive. Similarly, later on, he kills a lumberjack who tries to alert his colleagues of his presence. However, there’s a terrific scene further on when Mohammed comes across a mother and baby and the character must contemplate whether he should riskily spare them or kill them to protect his whereabouts and safety.
As each of these situations unfold, Vincent Gallo captures Mohammed with a stunning intensity that truly allows the viewer to feel every emotion and every moral dilemma that he goes through. He proves himself to be an actor who will go as far as he needs to get under the skin of this kind of a character, eating bark off a tree in one sequence and ants from an anthill in another. It may be entirely wordless, but what he does here is riveting and you won’t be able to take your eyes off him for all of the 80 minutes.
As a study of our predatory necessity to survive, Jerzy Skolimowski admirably strips his film down to the very core and provides a fascinating look into our human nature. Plus, the film is concise enough to remain gripping and suspenseful throughout.
★★★☆☆

Is Joseph Gordon-Levitt not playing Alberto Falcone in THE DARK KNIGHT RISES after all?