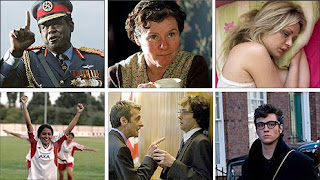 The UK Film Council have been responsible for many of this decade’s finest works of British cinema having funded an endless amount of movies that have gone on to be acclaimed by critics, audiences and awards bodies alike. Most notably, it put up for money for the Best Picture winning drama The King’s Speech.
However, the UK Film Council have now sadly been disbanded by the coalition government in order to save money and lift the country out of its recession, marking the end for a prosperous era of British cinema which some critics have ever called ‘the golden years’.
So as a tribute to this era of British cinema and as an epitaph to the UK Film Council itself, let’s find out what have been the best UK-based movies of the last ten years.

“While In the Loop is a highly disciplined inquiry into a very serious subject, it is also, line by filthy line, scene by chaotic scene, by far the funniest big-screen satire in recent memory.” – New York Times

Great political comedies are hard to come by. The last one I can recall was in the 1950s when Stanley Kubrick released Dr. Strangelove. Well, that was only the case until In The Loop hit cinema screens in 2009 of course.
The foul-mouthed, satyrical and darkly comic insight into dirty politics is not only a great reflection on the post-911 political landscape and war in Iraq, but is also packed with so many great lines and wry observations that you’ll miss half of them first time around because you were laughing too loud.
09. Moon
Director: Duncan Jones
Year: 2009

“They do make ’em like they used to – a fresh blast of old-school sci-fi, bursting with ideas and a stellar turn from Rockwell.” – Empire

Duncan Jones, son of David Bowie, emerged onto the scene with a bang in 2009 when he released his debut science fiction film Moon; a smart, stylish movie that despite its low budget has special effects that rival those of Michael Bay or Steven Spielberg.
Following Sam Bell, the only occupant of a Moon-based manufacturing facility along with his computer and assistant Gerty, the movie is carried by an intriguing mystery and a fantastic study of isolation and loneliness. Moreover, its also a contemporary and modern look at the way big companies are exploiting the Earth’s resources (and in some cases its citizens too) for personal gain.

“I think the movie is one of the most hilarious I’ve ever seen. But the symbolism and depth of the movie make me appreciate it as a masterpiece.” – Cinematical

Already a cult classic, the team behind the TV show Spaced turned the horror genre on its head in the funny, exhilarating and genuinely inspired Shaun Of The Dead.
Following two slackers who use a zombie infestation to try and win back Shaun’s girlfriend, not only did they introduce elements of comedy and romance that one would previously have thought impossible to integrate, but also brilliantly set it in a world in which zombies have appeared before in video games and movies.
07. Children Of Men
Director: Alfonso Cuaron
Year: 2006

“Made with palpable energy, intensity and excitement, it compellingly creates a world gone mad that is uncomfortably close to the one we live in. It is a Blade Runner for the 21st century, a worthy successor to that epic of dystopian decay.” – Los Angeles Times

Children Of Men has one of the finest, most thought-provoking narratives that the science fiction genre has produced in decades as we are given an insight into a dying world where women are infertile and humanity are counting down their days.
But what makes it stunning is director Alfonso Cuaron who brings it to life in a jaw-droppingly stylish fashion with complex tracking shots, breathtaking cinematography and a keen eye for detail that makes the movie impossible to look away from.
06. Fish Tank
Director: Andrea Arnold
Year: 2009

“A film that brilliantly and sensitively buzzes with life and offers its very own take on our world and our city. It delivers in spades attitude, humour, sadness, love, anger and hope.” – Time Out

A claustrophobic movie about being stuck in a dead-end town that cannot contain your high ambitions, Fish Tank was often described as Britain’s answer to Precious.
Following a teenage girl as she self-medicates on cheap alcohol, fights the local estate girls and reacts to every situation with hostility, it’s brutal from start to finish. However, the moments of aching beauty that shine through the terror – her love of dance and innocent love for her mother’s boyfriend – are what make Fish Tank so poignant, aching and overwhelmingly moving.

“Not since The Catcher In The Rye has there been such an acutely observed tragi-comedy about the horrors of being a teenager.” – Daily Mirror

Is this the greatest film ever made about being a teenager? If not it’s pretty damn close as Richard Ayoade’s comedy perfectly captures the freedom, tenderness, depression and angst of what it means to be a confused high school student.
Styled on the American indie films of the 1990s and the French New Wave ones before that, Submarine is aextremely cinematic and unique in its presentation while the script, furthermore, bursts with a creativity that British cinema hasn’t seen in years.

“A film that should be required viewing nationwide. A good blast of fresh air that sweeps you off your feet.” – Film 4

Mike Leigh’s underrated comedy about a primary school teacher’s refusal to come of age is a tremendous look at what it means to be young and make the most of what that youth offers before reaching adulthood.
Filled with layers of subtext, metaphor and symbolism, it’s a deeply artistic film but one that never feels pretentious because of its breezy tone and hilarious dialogue.
03. Man On Wire
Director: James Marsh
Year: 2008

“They say that seeing is believing, but Man on Wire will make you doubt what your eyes are telling you – it really will – as you shake your head in amazement and awe.” – Los Angeles Times

One of the most inspirational films I’ve ever laid eyes on, Man On Wire is the powerful documentary about an eccentric Frenchman who dreamed of tightrope walking between the two Twin Towers.
On one hand, James Marsh’s Oscar winning movie is a loving tribute to a part of New York City – perhaps even the world – that will never be replaced, while on the other it’s an uplifting tale of an ordinary man who achieved something magical through sheer determination and courage.
02. Red Road
Director: Andrea Arnold
Year: 2006

“It’s a fully realised portrait of a city, Glasgow, a portrait of a smart, watchful woman who works as a security monitor and who has endured great loss; and a portrait of the act and psychological implications of surveillance.” – Chicago Tribune

A thriller for our CCTV-monitored generation, Andrea Arnold’s psychological, erotic and unnerving work of suspense puts us directly in the life of a lonely security officer with a hobby for voyeurism. Only the hobby turns deadly when she sees a man from her past and begins to follows his every move.
Right from its very first moment, Red Road will have you gripped in a way that few dramas ever have. Yet even when the twists, shocks and reveals have come to light, you can still revisit the film and find new levels of subtext about British society and many more layers to the enigmatic protagonist, Jackie, extraordinarily performed by Kate Dickey.

“Intense, disturbing and powerful mix of vision and detail: a recreation of a terrible time combined with a vivid and distinctive artistic sensibility. Truly powerful filmmaking.” – Film 4

Steve McQueen gives us one of cinema’s most heartbreaking, jaw-dropping, nerve-shattering and totally devastating works of cinema with Hunger, a film that follows the last six weeks of IRA member Bobby Sands’ life in which he goes on hunger strike to protest the way prisoners are being treated in Ireland.
Staying away from the controversial political issues yet keeping the undertones of Guantanamo and Abu Ghraib just under the surface, the artist turned director instead offers us a unique view into both his psyche and the everyday lives these men lived. Almost entirely free of dialogue to capture the isolation and packed with mesmerising imagery, watching it is an experience that you will certainly never forget.
Tags:Top Ten List
Previous post

278 Views By Agents of Geek