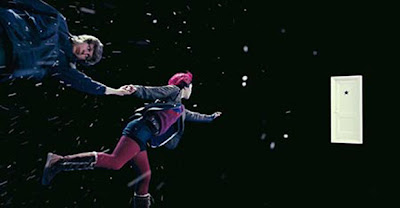 A few weeks ago, I got the chance to see Scott Pilgrim vs. The World again, this time at a midnight screening at the New Beverly complete with a Q&A with Edgar Wright and several of the cast members. Scott Pilgrim was one of my favorite movies from this year, and it stands as the only film I’ve seen twice in theaters in 2010. It really needed it the most after all, with a paltry box office of $31.5 million.

Enough has been said on the film already, so I’ll just dive right in to the question & answer portion.

How do you [Brian Lee O’Malley, creator of the graphic novels] feel about the differences between the books and the movies?
I did the books all solo while Edgar worked on his own thing. There wasn’t much collaboration between us two to get the movies to be exact adapations, we wanted there to be differences to make sure it fit for their own mediums. Plus, it’s a long production process and I understand that the movie can’t include everything. 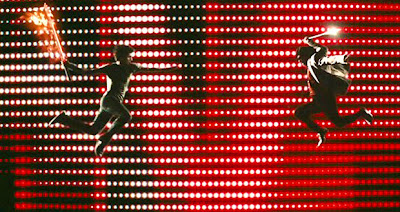 This role was very physical, how did you feel preparing for it?
Cera: I trained for 2 months, in fighting and bass. It was great because I got to know everyone before we even started shooting. Because of the exercise, I’ve never felt more confident. I was pretty much a stud by the end of it.

What was your most entertaining movie going experience?
Edgar Wright: My most entertaining movie experience was when I saw Hostel 2. It was a midday, midweek showing so there were maybe only 5 people in the theater. Then, during the cannibal scene, some guy came in just then and sat next to him. During one of the goriest moments, he just leaned over to me and said “beautiful.”

The soundtrack was fantastic and one of the many highlights of the film, how did you go about putting that together?
Edgar Wright: The soundtrack came together really came together because of my friend Nigel. He put together the score, and he’s been produced by Paul McCartney and some other big names. The idea was to have a different artist do their song as if they were a different artist, like Heck channeled their garage band roots, and Metric did a parody of themselves. We currently have three soundtracks out – one for the game, the score, and then the traditional soundtrack. We have enough songs to fill a fourth, and we want to distribute it, but it’ll depend on money down the road.

How familiar were you with the material before landing your roles in the film?
Mae: I was the only one who had read the books. I loved it before auditioning for the role. 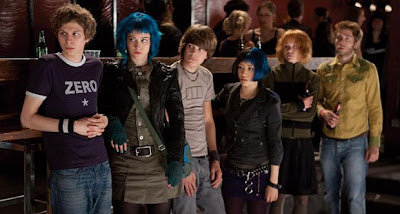 When you were casting for this role, how did it all shake out? Did you have people in mind from the beginning, or did you leave it open depending on auditions?
Edgar Wright: I had a lot of people in mind from the start. Michael Cera was at the top of my list from near the beginning. I was lucky and got most of my first choices. Casting spanned at least a year; it was a long process. One of the many special features on the Blu-Ray is the casting tapes. That’s a fun little feature.


This movie obviously draws a lot from video games, were there any specifically that you pulled from when writing the story/filming the movie?
Brian: I never had N64, so I don’t know the games well enough to have based anything off them specifically.
Edgar Wright: The fights were inspired and referenced a lot of great video games. I looked to Fuly coolly, Beck, Akira, Naruto video games, and especially Marvel vs. Capcom. For the twins battle specifically, the creatures were double dragons because there are two of them. That bit was an homage to Scott Wolf and his fabulous work in Double Dragons. [The Double Dragons trailer played before the movie, along with a few video game commercials.]


Are there any character notes that didn’t get explored in the movie, but that still influence who they are?
Edgar Wright: Julie’s secret fact is that she had a crush on Scott during college, that’s why she treats him the way she does. Roxy is half ninja, but insecure and angry about not being a whole ninja


What did Scott order off amazon?
Edgar: I don’t actually know. Maybe it was a Wang Chung CD? Hott Fuzz DVD?


What is everyone currently working on now?
Brian: I’m glad to be going back to Toronto and being a hermit again. I’m not sure what I’ll do next.
Stephan stills is directing.
Envy is in The United States of Tara and a film called Rampart.
Mae is focusing on her music and is also starring in the NBC show Parenthood.


Other odds and ends mentioned throughout the night:

Scott Pilgrim vs. The World Blu-Ray is out now and would make a PERFECT holiday gift for your friends or family. More people need to see this film.

When Should I Allow My Son To Watch DIE HARD?