Please forgive any disjointedness, I’m not running on my usual amount of sleep…

Last week, we met the Originals and saved Elena from Elijah…or so we thought. This week, we go back in time once again! These are usually my favorite.

We get a flashback to Bulgaria, 1490 and see that Katherine gave birth to a baby girl, disgracing her family in the process. This hidden child will prove to be very important. I wonder who the father is? He could be someone of significance down the road.

Elena stops by the Salvatore house to face her capture, Rose. They dive deep into the mythology; Claus is the oldest vampire and he wants to break the curse. He’s now likely after Elena, to sacrifice the doppelganger. This storyline reminds me of Twilight, with the Volturi going after Bella. Am I alone in this? 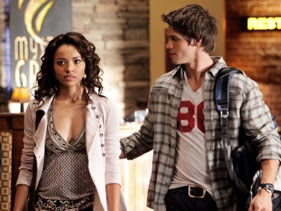 Bonnie and Jeremy continue building their friendship (soon to be relationship?!?). Although, a new student named Luka shows up. He’s black and likely witchy, so of course there’s chemistry. I hope they’re not related!

Elena goes down to the tomb to visit Katherine, and it’s Caroline’s job to open the tomb, and make sure Stefan doesn’t go looking for Elena while she’s busy. Caroline’s right to wonder why Katherine would tell the truth about this, when all she has done is lie from the beginning. Katherine emerges from the darkness and she does not look good. She’s been without blood for a few weeks now and it shows.

The Petrova family history shows that Katherine is the end of the family lie. But as we saw in the flashback that opened the episode, we know that’s not true. Elena brings blood as a peace offering/incentive to get her to spill on Claus and vampire lore.

Katherine and Claus go back to England, 1492. She was thrown out of Bulgaria for having a baby out of wedlock. While in England, she caught the eye of a nobleman, Claus. She was taken with him, until she found out what he really was. She ran, but couldn’t evade him forever. Now we get to see the story of Trevor and Rose, how they helped Katherine which led to them running for the past 500 years.

Rose has only been around for about 5 minutes and she can already see that Damon is in love with Elena. Perceptive girl! Rose and Damon head out to talk to someone who may know where Claus is. They reach the informant, who oddly hangs out in an coffee shop/wifi spot all the time because the glass blocks the UV rays. He was turned while in university, and now he’s got dozens and dozens of degrees. Apparently, his connection to the originals ends with Elijah, who they all believe is dead. 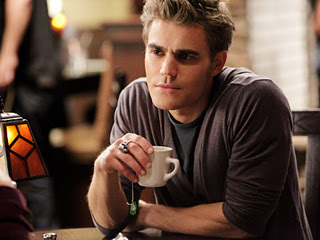 Caroline uses her and Tyler’s information swap as an excuse to keep Stefan from checking in on Elena. They gab over food and Stefan reveals that he’s a good friend to her because she reminds him of his best friend Lexi. Their fast friendship does make a bit more sense now, I had forgotten all about her existence. He finally wises up to her plot to keep him distracted. His first thought is that she’s with Damon (ew), which shows that he is bothered a bit by the fact that Damon is in love with her.

Trevor helps Katherine escape, by telling her to go a cabin for safety. Rose is there and ready to turn her back in to Claus. However, Katherine would rather die than go back to him, so she stabs herself in a suicide attempt. Rose won’t allow it and feeds her some of her blood to heal her. When Trevor comes back, Rose is distracted just long enough for Katherine to hang herself, knowing that vampire blood would be no good to him. It seems the only way for Elena to escape Claus is to kill herself or become a vampire. She used them to get what she wanted and didn’t even bat an eyelash.

Katherine finally came back to get the stone, Elena, a werewolf to sacrifice, a witch to do the spell, and a vampire to complete the reversal of the curse.

Bonnie runs into Luka, the new kid, with his dad, Dr. Martin. The moved from Louisana to Mystic Falls, by way of Salem. They knew some Bennets out there, you know that can’t be a coincident. Seriously, is every black person that comes on the show going to be a witch and/or related to Bonnie? We need more diversity than this!

If a vampire breaks the curse, the werewolves are stuck with the curse of the moon forever. And vice versa. Rose and everyone believes werewolves are extinct, until Damon tells them otherwise. Meanwhile, Elijah is listening outside, jingling a handful of change. I thought he would crush the coins down to a bullet or something, but instead he does something smarter. He throws the coins at the windows, shattering the entire storefront window. The sun streams into the cafe and the vampires scream and writhe in agony as they burn. Damon is fine thanks to the DayRing, but the others try to crawl to safety. Damon rescues Rose, but the other guy goes missing.

Luka demonstrates his abilities by floating salt on the table. They’re warlocks, of course.

Katherine returned to Bulgaria to see her family, only to find them all massacred. He killed her entire family just to get back at her for running. Apparently they can stop Claus with the moonstone. Did she make it all up to get them to let her out? She brings up a valid point that as long as she’s in there, she’s safe from harm. No vampire would go in there to kill her, only to get stuck themselves.

Damon and Rose have a talk about Elena and Trevor, about emotions and survival, and of course it leads them making out and sexxx.

“In order to survive, you need to not care about anyone.”

Damnit, why do I feel bad for Jeremy when he sees Bonnie and Luka talking? I don’t want them together because it’s her best friend’s brother! But, he just looked so sad and like he was thinking “of course she’s not in to me, I’m just the dorky younger brother.”

Elena finally lets it all sink that all the madness is not because of her and Stefan falling in love. She breaks down in Stefan’s arms…does this mean their back together? Their being apart no longer makes sense now that we know nothing is going to keep Elena safe.

Apparently, Originals can compel vampires just the same as vampires can compel humans. Elijah gets Slater to deliver false information – that the moonstone and witch will be able to break the need for a doppelganger sacrifice – and then stake himself. Then, we find out that Dr. Martin, the new kid’s dad is somehow working with Elijah! Bonnie’s in danger. Bonnie’s in danger!

There’s not another new episode until December 2. WHAT!

AND THEN THERE WAS YOU Movie Review

Peter Bjorn and John announce fall "All You Can Eat Tour"

AND THEN THERE WAS YOU Movie Review